Nothing bonds like bicycles! A very inconspicuous email announced the arrival of Matthias the transport geographer, who would come to Plymouth for a few weeks to see Jon. None of my business of course; I am a micropalaeontologist. But as I already mentioned; I’ve had business with Jon’s bike, which inspired Jon in turn to inquire if Matthias could liaise with my bike, and one thing lead to another and before I knew it I was actively enjoying Matthias’ excellent company. But as his visit would be brief the moment of his leaving was soon imminent, and Jon came up with a marvellous idea for a goodbye: a bike ride (who saw that coming?)


This would mean all three bicycles that had lived in my kitchen would together go to Clearbrook, over the trail I had biked several times before, and run twice as well. Marvellous! I brought biking kit (including helmet) to the office and very pünktlich I was ready at the bike shed. Matthias was there too, in civilian clothes (stripy shirt!), and with backpack. He evidently had different expectations!

Minutes later Jon also showed up, looking even more prepared: helmet, gloves, padded shorts; the works. But what’s different attires among friends? We were off!

We rode off campus, onto North Hill. Jon was in the lead, and Matthias, who didn’t know the way, guarded the rear. North Hill is fairly steep, and we were shooting down, only to turn to the left into an inconspicuous side road. I made sure I indicated direction with lots of pathos, so Matthias would have no doubts regarding where we were headed.

That was a mistake.

Indicating left only leaves your right hand for braking. That’s the front break. Which I had just tightened... I braked while gesticulating furiously and immediately felt the mistake. I thought “oh darn” while I flew though the air, over the handlebars; an antic I had never performed before. If I go downhill my fellow traffic users will have to make do with very concise gestures. And now I was reminded of why.

I smacked into the tarmac, feeling positively stupid, but luckily I fell fairly elegantly, so I got up immediately and got my bike off the road. Jon told me afterwards he heard the “smack!” but knows I’m Dutch, and fully realised that couldn’t possibly be the sound of me somersaulting off my bike, so he didn’t even bother to look back. When checking if Matthias was following into the side road he was up for a surprise...

The men immediately sped to my side, inquiring if everything was alright. Though blood was oozing through my trousers I was. Fortunately; two days before a half marathon is not a good time to get injured. The bike wasn’t really OK; somehow the fall had tightened the rear brake, and the wheel only spun with difficulty. We couldn’t find why that had happened, nor could we do something about it by lack of tools. So I tried the bike, figured it wasn’t that bad, and we decided to go on as if nothing had happened.

After that silly incident (how I hate having to admit such blunders on my blog!) the bike ride was idyllic. It was a beautiful evening, the route is very scenic, and the men were in shape. Like rockets we shot up to Clearbrook. 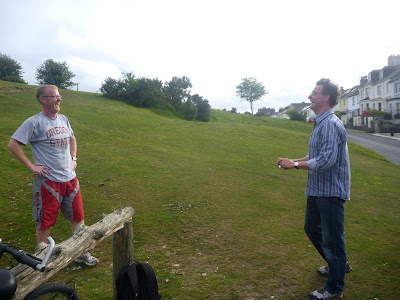 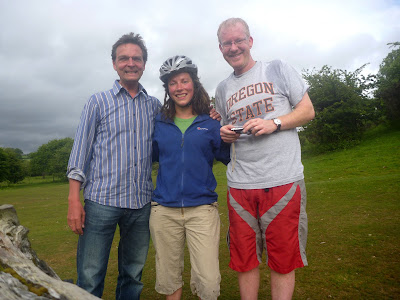 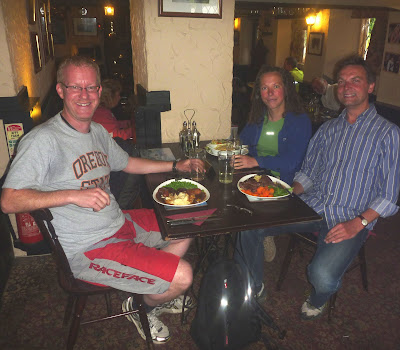 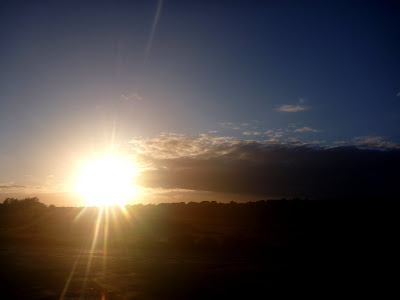 Upon arrival we had a small photo session; Matthias wanted something to remind his Plymouth time by. And then we went in for a splendid dinner in splendid company. That was easily worth the blood! And when we rode back, in a more relaxed way as it is all downhill, the sun set beautifully over the moors. I think Matthias got a worthy goodbye...
Posted by Margot at 15:48