What goes around, comes around! Readers with a good memory will remember my epic struggle with a seat post that had rusted into place (the “project seatpost” series). It concerned the fairly elderly bicycle of Jon, our local transport geographer, which I repaired for him. And after that I borrowed the bike for some occasions.

Then the day came that Jon was expecting a guest; Matthias, a German transport geographer, in the UK for his sabbatical. He was a keen cyclist. Jon quickly realised he knew someone who had a bicycle to spare Matthias could borrow...

Matthias was happy with the bike, and decided to take it to afore mentioned BBQ in the pub. I was there already, somewhat apprehensive as I knew with whom he had been drinking the night before and what state his navigation skills allegedly were in, but that was all unnecessary; a text message arrived that not the man but the bike had given up. Issues with the back wheel! And one needs a back wheel. 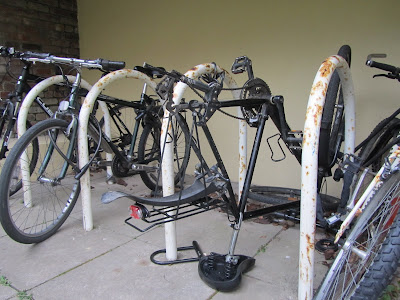 Work in progress
Matthias took the train home, and on Monday we convened. He took the bike apart, and concluded a broken axle and worn ball bearings. He was evidently on a mission to get this thing fixed! Would that be karma? If you repair one transport geographer’s bike, fate sends you another one to fix yours?

I have no idea how easy and fast it will be to repair that thing; it’s a very old bike, and getting spare parts for it might prove interesting. But things are evidently moving along! I am a bit ashamed that I may get a good-as-new bike as thanks for lending out a wreck, and might get a free crash course in bike repair on top of that, but then again, if it happens anyway I might just as well enjoy it... 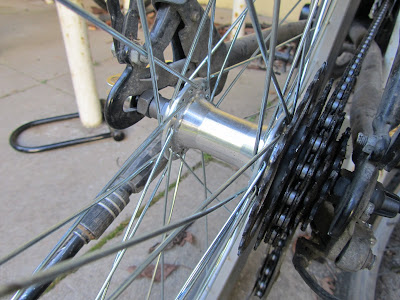 And it turns out Matthias repairs bikes faster than I can write a blog post! I was prevented from concerning myself with bicycles as we had a project meeting (blog post will follow), and before it even halfway Matthias already reported the bike was fixed and rode like a dream. And indeed, I already encountered it in the bike shed, with the shiniest rear wheel in the world!
Posted by Margot at 09:51