Visit to the Netherlands: part II

For the first time in a while I visited the Netherlands. The reason to go this specific weekend will be revealed, but not yet. I already described my visits to my dad and to Roelof, and then my path lead to my sister’s abode.

When I approached the house I saw Aernoud, my sister’s husband. I hadn’t seen him in ages; my sister had come to visit me in Plymouth, but he hadn’t come along. But not much changes. Who does change is my little niece; she was entirely unabashed though, and immediately showed me her Queen’s day acquisitions.

After a glass of lemonade in the sun I figured I might seize the opportunity to indulge in my latest addiction before my sister would show up. She was rowing, so maybe I should enjoy Hilversum’s marvellous surroundings and go for a run on the heath! And so I did. I was back and refreshed before she appeared with blood blisters.

We spent the day catching up, drinking tea in the sun, and doing hide & seek in the woods. And having dinner and drinking more tea and catching up more. I had a small try at spoiling all the kids with English confectionery. We also tried to take a double portrait, but the camera ended  up focussing on the hedge instead of on us, so that will have to be redone next time.

I also got a well-deserved bollocking from my sister; I’m a crap relative who always forgets birthdays; especially of people I haven’t known all my life. And I should better myself. And with that resolution I left. And I left in style; I’m an infamous tree-hugger, and my sister said in jest she therefore couldn’t possibly drive me to the railway station, but perhaps her loving husband would be willing to get me there in the CDA cargo bicycle. And I got so enthusiastic about that he actually did it. Who has ever been brought to a railway station in such a vehicle! 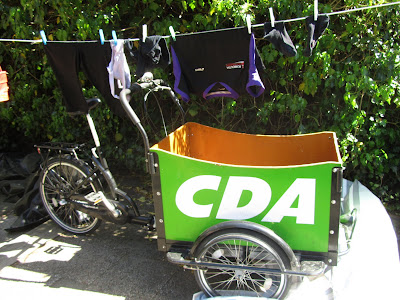 The unequalled cargo bike! With my running kit on the clothes line above it.
Posted by Margot at 08:59