Caving, that’s walking into a mine, sloshing through waist-deep water, taking a few pictures, and walking out again, isn’t it? Well, not always. Sometimes you don’t get around to making many pictures. And sometimes the rest differs a bit too. 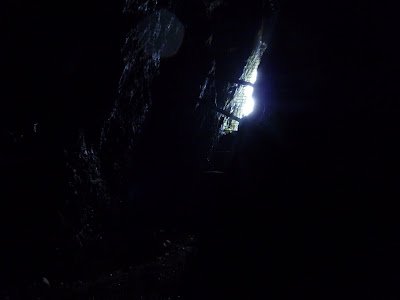 The entrance, seen from inside. 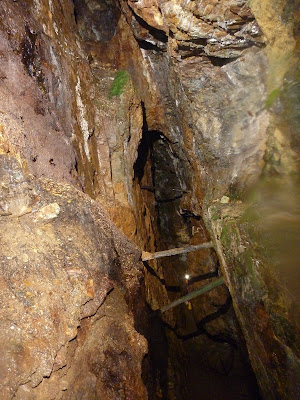 And seen from the outside in. The little spark in the distance is Dave fixing a rope to the wall.
We gathered at ten in the morning on my first weekend trip. I got out my brand new waterproof bag and chest harness and geared up. The entrance already was promising! Evidently, the lode it was all about was thick and subvertical. And that tends to lead to impressive, gaping cracks in the rock, with gloomy, rotting beams to support the walls. And indeed. And this time, either the rock or the panelling was not of very good quality, as after only a few tens of meters the floor had given way for the first time. A ladder was draped over the gaping hole, and as that may not suffice for safe passage we needed to start rigging. The experienced cavers did that in a whiffy, of course, and soon I crossed, a bit wobbly still, in the beginning. And then immediately afterwards we had to SRT (Single Rope Technique) up. And then crawl through a low tunnel, the middle of which had collapsed, simultaneously avoiding falling down and avoiding disturbing the tens of bats dangling from the ceiling. Climb down all sorts of holes that were not dangerous enough for a rope, but still tricky enough for some sweat. And that was only the beginning. 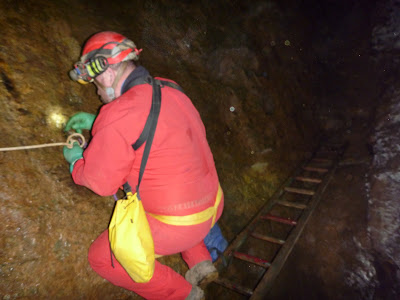 Dave rigging, seen from somewhat closer
We went down a shaft, in brotherly symbiosis with a waterfall. I like such things! The shaft ended in crotch deep water. And from there it was fairly standard. For a while. 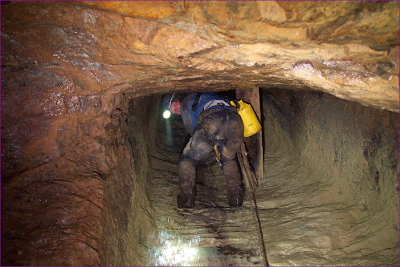 Pic by Dave
At some point we came across a waterfall, with some half-serious rope dangling in it. Some tough, unshaven blokes from the Cornwall caving group (it was a joint trip) didn’t think twice about it and ran up. It didn’t look too Health & Safety to me, but heck, I don’t like Health & Safety, so I followed. From there we could go on! So we did. And soon after found a vertical shaft with an old chain ladder in. We could go up! And on! So we did. And we came to some hole. Now what? Go in, of course! The men climbed on top of each other in order to reach some accidental bolt we could hang the rope from, and one of them went down to explore. In the meantime we figured that the rest had not bothered to follow. Oh well, we would find them back. 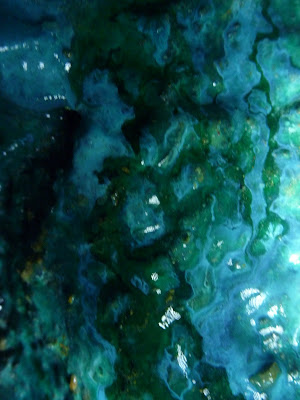 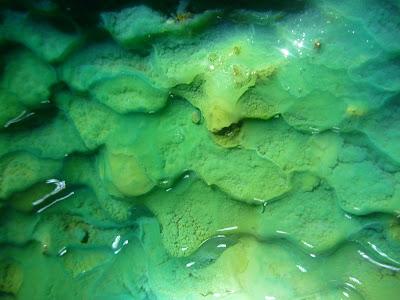 In an old coppermine you always get nice blue and green stuff!


The guy who had gone down judged it was not worth it. So we balanced over a loose plank to get over the hole. And found another hole with a loose plank. And a hole where the rock had collapsed, but the rails still hung on. We negotiated it all! These guys stop at nothing. Quite often we had nothing other than ourselves to secure the rope on. But we made it without any mishap. 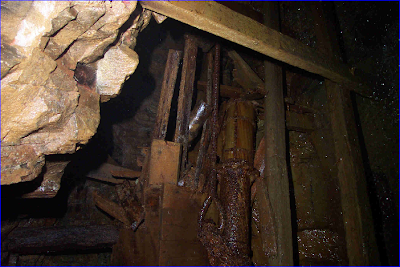 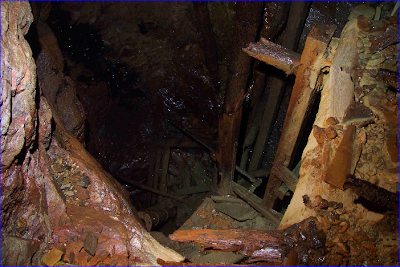 Amazing old engineering too, in this one. Pics by Dave.
At some point, on some unstable slope, we reached a dead end. A what? The men immediately scurried off into all sorts of possible side-tunnels or arbitrary holes in wall, floor, or ceiling, but it seemed that they were all dead ends. And we figured the others might be getting slightly impatient... so we rope-danced back to the waterfall, where my lamp batteries died. The men were really helpful, and shone their lights where I was going. Health and safety? Ah well, this time I actually attached myself to the rope. By the light of my torch I made it down some more waterlogged, unstable slopes, until there was a quiet bit where I could swap batteries. Next time I bring hundreds of these! This new lamp is great, but it sucks the batteries empty in next to no time. 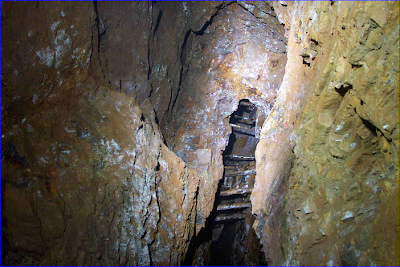 The ceiling, or lack of it, where Dave was waiting for us. Pic by Dave
Soon after we met Dave again, who had simply fallen asleep when we kept him waiting. I was quite glad that we were on our way back by then, as I hadn’t figured we would be down there so long, and hadn’t brought any lunch or water. I’d had coffee and muesli that day... not enough to last you to the night. And I had plenty in the car! The others were wiser, and had some snacks while we discussed politics and divorce laws. As you do, half a mile into a hill! 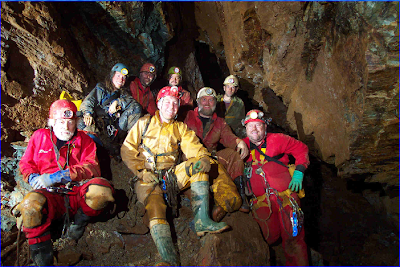 Pic by Dave
We went back. The only time I had done SRT before it took us ours to come back up. But this was a dream team of SRT heroes, and everybody simply ran up. And the rest of the obstacle course was no issue at all, of course. It was 5PM by the time I was back in daylight. And it would take quite a while longer before we were out of there; the last man had to undo all the rigging. We waited, cleaned our gear, took a leak, and then my car beckoned. It had dry clothes and food in it! Food! 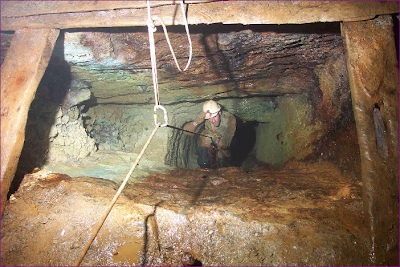 Coming up the shaft again. Pic by Dave
The Cornwall men drove off, and the Plymouth crew decided to find a pub. Two attempts to find an open one, one pint, and my satnav trying to direct me back over Tamar bridge (which is a toll bridge, and I had forgotten my wallet) resulted in me being home at 9PM. What a day! 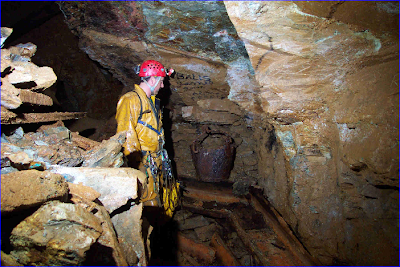 Pic by Dave
Devon Great Consols was really impressive. The big SRT up and down was much more eerie and vast. But all together, this was more spectacular. Too bad though that I needed all the batteries I had with me for the lamp. Not much power left for my flash! And without a flash you don’t get very far in such a stuffy cave. So this trip I mostly keep to myself! Even with few pictures I don’t think I’ll soon forget...
Posted by Margot at 18:51