Visit to the Netherlands: part I

So much to do. So little time. But now for something completely different!

I was enjoying myself atypically much while driving to Exeter. And the radio stayed in place to quite close to the airport. And this relaxed mood would remain for a while. 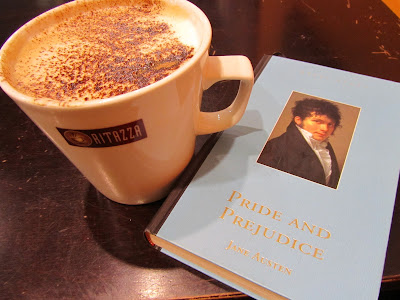 How to make a stay at an airport pleasant
Lizzy Bennet and Mr. Darcy accompanied me on the plane. Without further incident I reached Schiphol, then Amersfoort, then sunny Harderwijk, where my father was waiting for me with two bicycles; the way a Dutch father should pick you up from the station. And in his back garden his wife was waiting for me with a cold beer. Sometimes life is simple. 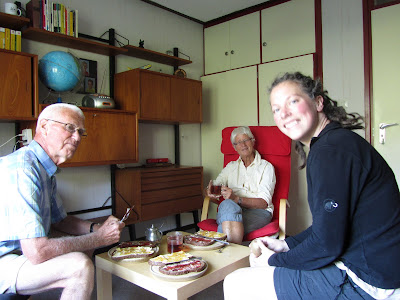 A family breakfast the next morning
I had been properly updated on their life when I left the next morning. Next stop: Amsterdam! All train stations were filling up with boisterous people dressed in orange. Going to Amsterdam on Queen’s Day may sound like self-torture; half the country wants to achieve that feat, and public transport traditionally struggles with accommodating that wish. But safely I stayed at the southern end, and soon I wandered through changing streets to Roelofs unchanging abode. Good to see him again!
Another very relaxed day unfolded. I drank coffee with Roelof and Micha, had a shamelessly luxurious lunch, and then retired to a quiet terrace on the bank of the Amstel, for hours of sun, conversation and beer. Splendid if you realise we are three workaholics! And splendid to see that that far south along the Amstel the only signs of Queen’s day are the numerous people dressed in orange; no throngs to be seen. 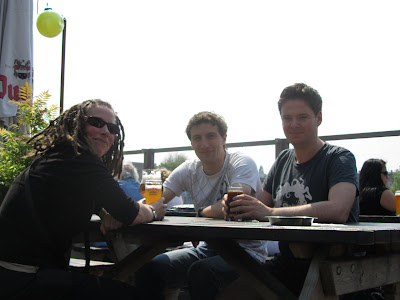 Relaxing in the sun
Later that day more friends joined us. Soon we’ll have known each other for twenty years! That’s unimaginably long. Maybe the more so for me; most have gotten themselves a serious job by now, or a grown-up’s house, or a wedding ring, or kids, or several of the above. I am closest to our student past of all of us... Grown-up as we may be, though, lots in us remained the same, and it was very special to see all of them!
Quite soon the discussions became heated, political and ideological. I love these people! But I was tired, so I didn’t mind the debate ended, and I could lie down on Roelofs couch. It would be a strange night, but perhaps less strange than it sounds; one of the invited had been Floor. Of course it was; the sheer ardency of the discussion was a clear indication of his presence. And he lives far away, so he crashed at Roelof’s too. It was only the second time that I saw him since we split up. That’s already three years ago though, and time heals much; furthermore, my timing concerning hesitantly returning to the world of courting helped pushing the balance further away from woe and closer to camaraderie. So it could have been a very restless night but it wasn’t.
The next morning I half woke from Floor stirring. Next thing I noticed was that gentle hands draped the sleeping bag, which had gone all over the place, back over my body. Very sweet...
I got up too. We tried to negotiate with Roelofs espresso machine, and did the voluminous dishes, until Roelof appeared too, and we had breakfast. Soon after that it was goodbye. I should come around more often! Living abroad and being a workaholic increases the chance of neglecting one’s old time friends. But they are such an asset!
Posted by Margot at 20:22