“What if it is all dry and clean?” Rick, who is famous for his squalid underground trips, had promised us one of his trademark excursions, but it had been very dry recently, and on the way to the adit he wondered if he might not have promised too much... he needed not worry though.

Six enthusiasts arrived at the first adit. Rick had said we would do two; first a filthy one, and then a wet-but-clean one. Very cunning! That way we would enjoy all the squalor available and still get back to the cars acceptably hygienic. (Yeah right!)

The adit was such that the men started singing the wet bollocks song (it does not have lyrics) which is often heard in mine explorers company. The ceiling got lower and lower and at a certain point we needed to take our helmets off in order to be able to keep our noses above the water without having to tilt our heads horizontally. I was having a ball! 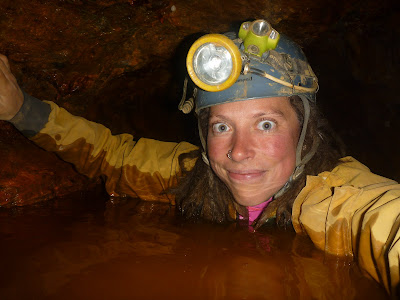 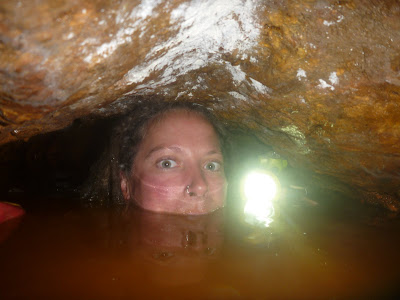 And it got deeper!
After the bit with little air space we were rewarded with a beautiful shaft, with all sorts of bobs and ladders and things still in it. And after that there was a part of the adit that wasn’t very wet; just muddy. I took some pictures, mainly for John of the Trevithick Society who was bouncing off the walls in enthusiasm for the industrial remains, and then we headed back. John the Fluorescent (who had turned his jacket inside out so he wouldn’t spoil our pictures with his showy hi-viz!) and Marina had shown up in waders, and these would have filled up in this adit, so they were waiting for us at the entrance. Altogether we went to the next attraction of the evening, four of us leaving a conspicuous mud trail behind. 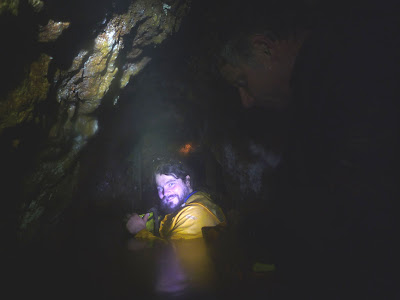 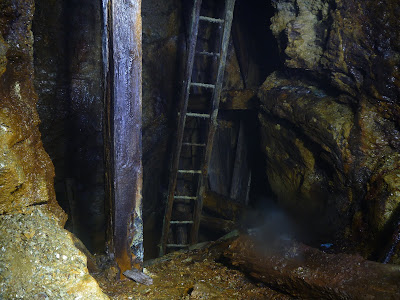 Wooden remains in the shaft 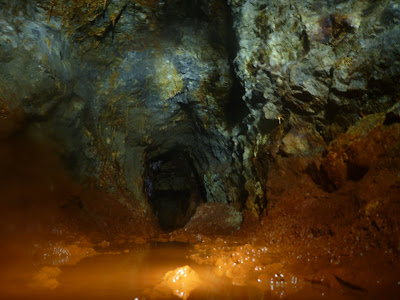 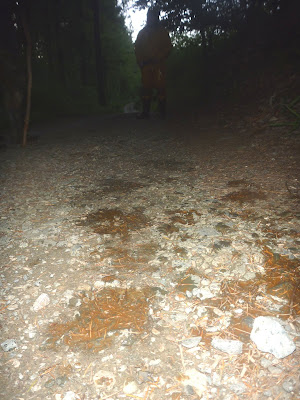 Rick at the end of the trail of mud he's just produced
The next adit was hidden in the woods, so we first staggered through dense growth, then sloshed through the very swampy stream coming out of the adit, and then walked into the very spacious next adit. This was a strange one! Even Rick didn’t know why it was there. It did not show any signs of having hit anything lucrative. What it did show signs of was being almost as muddy as the previous one. I had a bit of a fit of giggles at the end, where the mud was so deep it was genuinely difficult to walk. 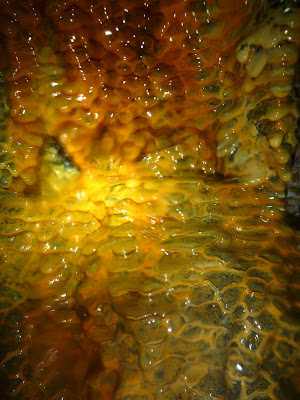 Beautiful flowstone in the second adit
Beside muddy (we could have known!) it was also cold, so it wasn’t so bad it was only one straight tunnel and we didn’t linger for very long. As I had no idea how long the walk to the adit would be I had put on my thin summer short-sleeved and similarly trunked wetsuit on. Optimistic! By the time we got out I couldn’t feel my feet. Back at the cars I did a little trip-with-Rick dance to warm up again, but it would be in the pub I would be able to feel my feet again. The pub was one of which I wonder if it was real. It would easily one of those that turn out to have vanished when one returns in daylight. All in all a longer trip than anticipated (and I had wanted to get good nights of sleep this week, with the half marathon in mind!), but a good one. And Rick’s reputation is beautifully intact!
Posted by Margot at 14:56