Easter is the main celebration of the Christian church. I ignored it. Not being religious already cuts out the church going, but beside that I didn't do anything social, I didn't eat even a single egg. I worked! And if I didn't work I ran or cleaned my house. It really is tidier now than it has been in quite a while. So in a way I had an Easter holiday with a strong Calvinistic feel to it. I am, however, not the purest of Calvinists, so I texted Federico to find out if he was up for a not-very-Calvinistic beer. He wasn't, but he planned to go to the beach the day after, and if I cared to join?

The next day; that would be the first proper working day! But after an Easter like that I figured I could do with some Catholic frivolity. And the previous time he tempted me I hadn't regretted for a second that I had given in. So after lunch I happily buggered off, into the sunshine! Federico took me to a beach where one could hire devices such as surfboards and sit-on kayaks. And there wasn't any surf to speak of, so we inquired after kayaks. They had some, but only for a short time; they were booked from 3PM on. So we quickly jumped into our wetsuits, and off we were! 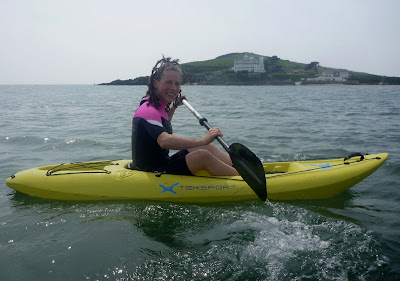 I had never tried one of these; they are a bit strange, but not in an unpleasant way. They don't glide through the water like a sea kayak, but they are much easier to handle than a river kayak. So it was fun! 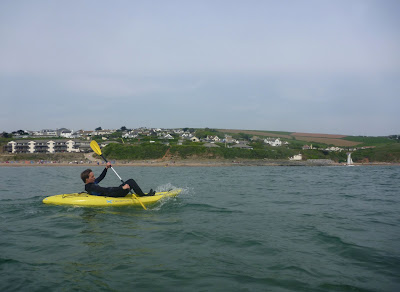 Federico shows one can also work these while lying down
Soon we had to abandon these, and went for a swim instead. Doing that I figured that a 2mm shortie wetsuit might be a bit optimistic in English April. I had brought only this one, as I was eager to try it; I had bought it for caving purposes, but had never come around to actually wearing it. This was my chance! But short sleeves was a bit too much. The thickness was alright, even though this was a lady's fit, and apparently ladies have a 1 m wide bottom in the minds of the wetsuit designers. I had a bit of a superfluence of water sloshing around in these regions! But well, that's how one learns. It was lovely to be frolicking in the water instead of sitting in the all-too-familiar lab. I guess every real or imagined Calvinist needs an assigned Catholic to save them from time to time!
Posted by Margot at 20:19