When I registered for the Plymouth Half Marathon I was wondering what had gotten into me. A half marathon? That’s far! My standards have changed in the meantime, as resilient blog readers will have noticed, but I still have my limits. When Neil asked if I would want to do the Tavistock Half Marathon as well, I detected that this was a wonderful example of what’s beyond these limits, and I told him one official 20km race was enough for one spring.

Neil, however, has never heard of the word moderation, and he runs half marathons more often than I wash my hair, so he was not disheartened at all by my lack of cooperation, and prepared for running with his brother. And I figured one cannot let one’s running mate participate in such an event without at least offering some support. So instead of running for hours in the blazing sun I contented myself with standing in the same blazing sun (forgotten sun cream! Or a longsleeve! Or a hat!) with two bunches of flowers. Neither of the men was in top shape that day, but I figured they would be way, way too stubborn to let that get into their way of finishing in a good time. And I was right!

We’d run 20km around Burrator Reservoir in ~1.55h, so from 1.50h I started to expect two sweaty siblings to pop into sight. And only a few minutes later they did! A good moment for some jumping up and down and shouting some encouragements. The last 500m of the race was run on an athletics track, so I could witness their last round. And after 1.57h, and a few last metres of sibling rivalry, they were in. Heroes!

The race track was for athletes only. Neil spotted me and walked over to the fence to collect his flowers, but his brother seemed to have moved enough the last two hours and stayed put. No problem! For some reason, the English don’t see how flowers can enliven such events; I literally saw absolutely nobody else with any. And rules seem not to be applied too strictly to something as rare as ladies with flowers, so I could deliver the other bunch in person. Good; these men had worked hard for them! The temperature was unforgiving and so had the route been. I hope many other supporters have been inspired, and next time there will be more floral opulence at the finish! 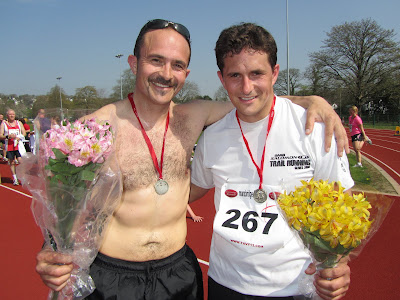 While watching the fastest runners come in I had noticed, by the way, that the average age was higher than that of those who excel at several other branches of sport. That’s encouraging! After the race I looked up the stats; the average age of the first 10 runners (1 woman in 4th position; the rest men) was 37.5 with a standard deviation of 6. Good to see people even older than me kick some ass! Though one could doubt the accuracy of the data; I could not help but notice that Neil’s brother was actually registered as a female runner...
Posted by Margot at 08:14