Splendid dinner for a lady and a gentleman

“You will have to dress up like a girl”. It sounds so simple! But this innocuous remark was the harbinger of all sorts of things.


Why was I told to dress up like a girl? Neil had been invited by a restaurant owner he had legally represented in the past, and would be asked to represent again in the future, to dine at his restaurant. And dining alone is boring, so he needed a date. I got the honour of filling that role, but it did mean, considering the nature of the restaurant, that my normal troglodyte style would have to be abandoned for an evening. And I like a challenge!

I had not ventured in such an establishment in the UK before, so I figured I could perhaps do with some advice. And the good thing is that I have a personal advisor on basically anything one might need advice on: Rob! He agreed on being my fashion consultant, so now my task was to take pictures of myself in outfits I thought might do, and let him pass judgement. As this took place in the lab it didn’t take long before I had some female accomplices willing to add accessories to whatever Rob picked. It takes a village to dress a woman.

The finished product! Dress and shoes picked by Rob, scarf provided by Marta, and bag by Jessie.
It takes a man to dress a man; on the day itself I got a text message from Neil, asking what he should wear. I told him to wear something that matches dark red. And went for a run. Why not go from sweaty running kit straight into a dress. I did need some time to change my nose ring, tidy up my hair, apply all the make-up I possess, scrub all the ochre from my mine explorer’s feet, and more such things; it’s so much easier to be a scruffy scientist! But I got it done. And quite punctually I saw a familiar car turn into my street.

What I hoped happened: I saw disbelief in Neil’s face when I came strutting out of my house. I smiled when I saw he wore pinstripe, of which he knows I like it, but had managed to add a tie that utterly mismatches with dark red.

The restaurant owner and his partner greeted us at the door. They were really nice people! And after a first drink they seated us. Then followed a most pleasant dinner. The host looked after us well and tried to pour as much wine down my system as he could. With Neil he was chanceless as he was driving. When we were done we had some more drinks (they had Laphroaig! So far I’d been really calm with the alcohol, but Laphroaig... that’s a different matter!) while those involved talked business. And then, after a most cordial goodbye, we left.

When we reached Plymouth it was time to give Neil the opportunity to catch up. With Leffe. And I joined. Maybe not the wisest thing after wine and two whiskies, but what can I say, sometimes the moment inspires indulgence rather than restraint, and this was one of these moments. It was a splendid night ending splendidly! And worthy of repeat, as far as I’m concerned. It’s quite possible this won’t be the last lawyer-festooned blog post... 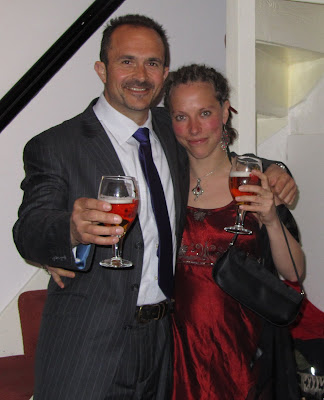