There’s holes in the ground that have stronger canine relations than Dog Hole; the two carcasses we found last month made the name of this week’s trip sound a bit presumptuous. However; Dog Hole is named after the dog leg shaped entrance, and that will persist long after the carcasses have been reclaimed by entropy. It had been a last minute decision to go there, but I was glad, as somehow I had never ended up there.

Richard lead the way; he crawled to the gate, found out that this time he had the right key, opened it, told us how we could get past the dog leg, and vanished. I was second; I crawled through as well. This bend is easier with shorter legs... finally, an advantage! The third came through too. That was the easy part. The fourth got stuck and turned back, accompanied by the unfortunately tall fifth, and then the sixth met the same fate as the fourth. Yet again a trip of which the participant numbers are halved at the entrance! In the meanwhile Richard lay on his back in the first chamber singing “bored, bored, bored, bored...” 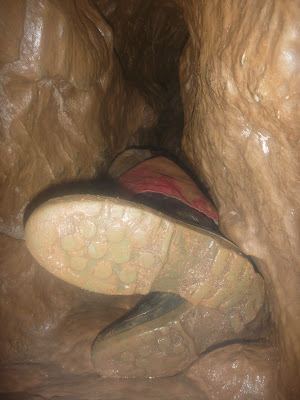 This is what the guy behind me, who had come through the Dog Leg, looked like from where I was sitting. He is trying to talk the lady behind him through the difficult part. Where he is is an easy bit! 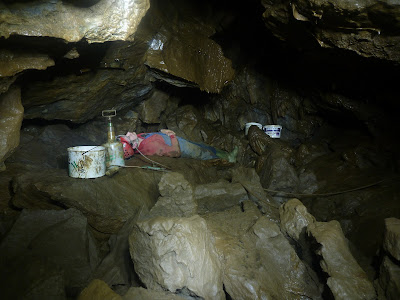 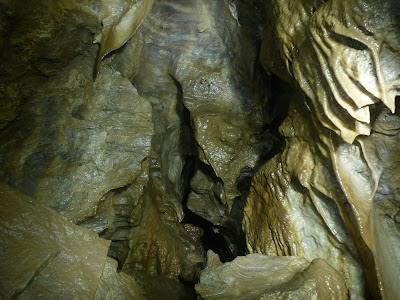 The other side of the chamber Richard was lying in
Luckily, the three separatists could have some fun in the ungated part of the cave, and perhaps in Prid, which is a stone’s throw away. We pushed on! I liked this place. Lots of crawling, sliding and squeezing. Some pretty chambers and some nice dripstone formations! What more does one want. 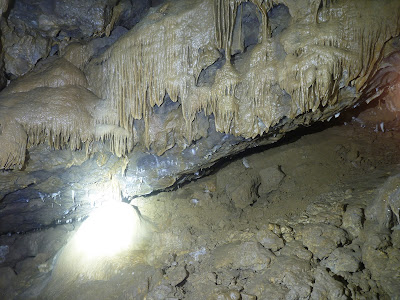 Pretty speleothems in the next chamber. Richard had been shining on the blob all the 15 seconds of exposure time.. 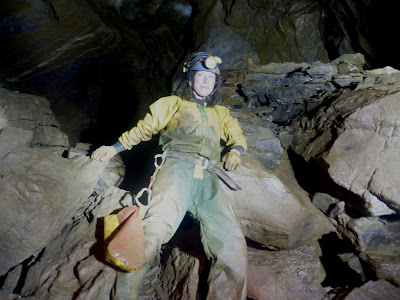 And then we made a picture of me!
When we came out the others were already waiting, and united we went to the pub. Good to find such a little jewel at such an obvious place after such a long time!
Posted by Margot at 18:42