Imagine you're a small girl in a dark place, surrounded by tough men. One gentleman of somewhat lascivious reputation sternly commands you to lie down. Then you feel the hands of many men on you, strapping you down until you can hardly move anymore. Got that? Good! Then you have an idea of what cave rescue training can be like.
This evening we would try to find out how one could get a victim out through a difficult structure called “the trumpet” in Radford Cave. Six tough guys and me had shown up for this exercise, so we kitted up and headed for the trumpet. I had done this climb twice before, so I was up in a jiffy. The men decided to first get some aids into place before they would follow; we would, after all, not only have to be able to come back too, but that would be while guiding a stretcher down, and then one needs as many things to hold on to as one can. 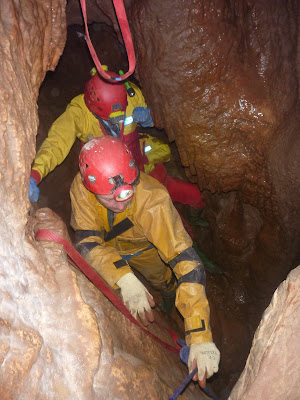 The men installing some slings and loops in the trumpet
When that was done we gathered in the Red Corridor to discuss the plan. We could do this with an empty stretcher, or perhaps with a modest victim; once we managed that we could some later day try it with a victim of any size. I volunteered for being the victim. I’m likely to be the lightest, and I had never been a victim before. And I had another reason; that Saturday I would have to pretend to be a lady, and that works better without ostentatious bruises everywhere. And the victim should not get too battered, right?
When that was decided the somewhat unsettling scene described above unfolded. And down I went! The route was: down a short steep slope, through a narrow passage with a puddle, and then vertically down the aforementioned trumpet. Then another passage, an inclined chamber, and then it would be enough for one night. So I was immobilised, goggled (this is for preventing rescuer sweat or general grit falling into the victim’s eyes), and slid down the first ramp. It worked well! It’s quite a surreal process. You can’t move, you cannot aim your light, you’re looking through steamy goggles, and you lose sense of space. But it was fun! 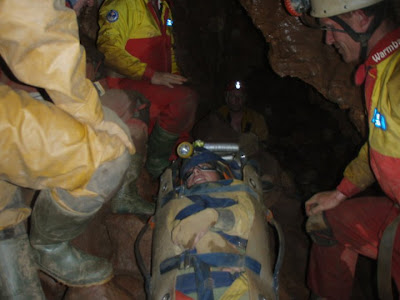 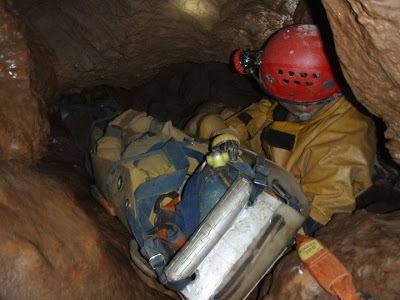 This is Lionel and me in one of the more spacious passages. Pic by Paul.
After the slope came the passage. That provided some challenges. The man in front of me required assistance, but that passage is barely enough for one person, so for someone to get past me and join the man in front was quite a feat. But a man’s gotta do what a man’s gotta do, so Lionel, somewhat lascivious reputation and all, came squeezing past. It was quite amusing. One gets to know one’s fellow rescuers from quite close by once in a while.
And then the trumpet! By then I had gotten used to precarious dangling; the stretcher was tied to a rope and they wouldn’t let go. And I couldn’t see or feel that rope, but knowing it was there was enough. There I went! Suspended in mid-air. It went well.

The men were profusely sweating by that time (thank goodness for the goggles), but they were up for more, and dragged me to the top of the main chamber. There the call of beer had become strong, so I got out, and we got the empty stretcher past the next demanding structures, and then out. Job well done! We know now how to pull this one off. I trust we could get a victim twice my weight out if needs be. Satisfied we could answer the call of the beer! 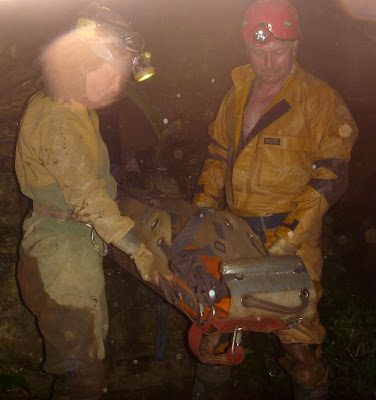 Mission accomplished! The empty stretcher as we dragged it out of the entrance. Pic by Paul.
Posted by Margot at 16:56