How the Industrial Revolution still keeps Britain’s residents fit. The landscape around here is littered with old rail tracks; they tend to be quite scenic, littered with industrial relics, and they don’t go up and down too steeply. And that makes them splendidly suitable for leisurely use!

I biked the old Brunel railroad from Plymouth to Yelverton several times. If I bike to Plymstock I tend to use the old track to Hooe. And when I did a long Dartmoor run with Neil we used the old railroad to Princetown.

I had planned to run the old track from Ivybridge north on Saturday, but with my car broken that didn’t really work. So I came up with plan B: bike to where the path to Clearbrook becomes scenic, and run from there. The path goes steadily upslope, so if you run up any distance you have a good chance of also making it back. So I just set off, seeing how far I’d get. And I got into a nice flow! One bridge after the other appeared. And after the third bridge I knew the next thing would be the tunnel. And that’s bloody far; even on bicycle that counts as exercise! But one can imagine the appeal of a tunnel. I got the idea in my head of running to the other side of it (of course) and back. And it stuck there!

I started expecting to see its gaping mouth after every bend, but of course it eluded me for a while, but finally there it was. I ran in and vanished from this world. If I run alone I have my iPod on, quite loud, because I like being lost in music while I run. But if you then run in the dark you lose all contact with reality. I had to take one ear plug out… 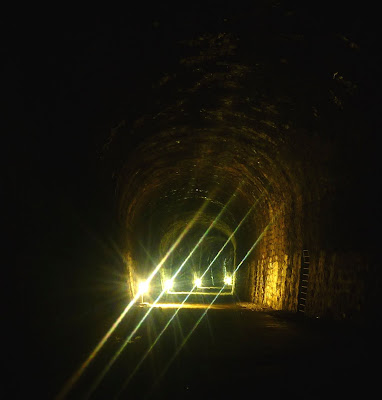 I took some pics, and turned back. And on the way down you can maintain a good speed! That is, until your body starts reminding you of the distance you have already run. I ran the last few kilometres desirous to see the end of the track, but that’s a good sign; I can motivate myself to run further than I had thought! And at the end I gladly greeted the sight of my faithful steed. Biking home is a nice cooling down. This might be a good routine actually! I don’t see many new things along the way; I’ve been there a bit too often, but it is a good venue for a nice carless run. Thanks, Brunel! And thanks for that bridge too, by the way.
Posted by Margot at 16:04