This should have been a blogpost on a run on Dartmoor! It isn't. I got all ready and got into my brave old car. I turned the key in the ignition and... nothing. Hmm.

When you own a 17 year old car it's good to be a member of some breakdown service, and I am. So I decided to just phone them; I'm useless with cars myself! And soon a chap appeared who started fondling all sorts of nondescript parts of the engine. He soon reached a verdict: my battery and alternator were at the end of their lifetime. The latter failed to charge the former, and apparently the former wasn't too good anymore itself, and a car with a flat battery is not much use. So the AA guy escorted me to the garage, in case the system would not even make it there, and we left it there. After Easter they will see what they can do! 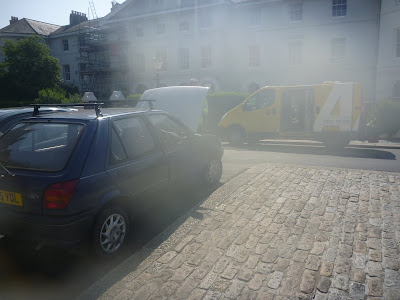 I had some dirt on the lens... how would that have ended up there? But the general picture is clear enough.
It's a bit silly to bust your car just at the beginning of a bank holiday, but well, Murphy rules I assume. That's what you get when you buy an old car! Bits fall off sometimes. There's worse things. I'll just go for a run on the old railroad later. One does not need a car for that! 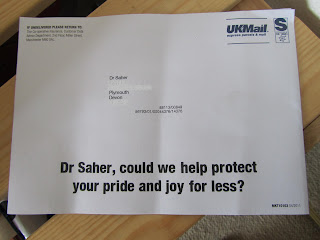 And then I got this in the mail - an advertisement for car insurance! If all my pride and joy is contained in that silly old car something's wrong...
Posted by Margot at 13:30