My programme for the Sunday: hung-over caving. And how reliable I am. I figured dining with Neil would have certain effects, but I also figured the best place to get rid of these would be underground. So painfully early I slipped into my scruffy pre-caving gear (what a difference with my outfit of the previous day!), got my prepared sandwiches out of the fridge, and waited for Dave with a coffee in my hand.
This trip was another Cornish one, and this one was typically far away. And if you have a wobbly stomach driving the length and width of the Southwest, especially with an appreciator of speed such as Dave, might not be the best activity to engage in, but I made it alive to the meeting point. And as soon as I got out of the car, beheld the beautiful scenery, and got into my reassuringly muddy-smelling kit, I felt much better.

Through glorious sunshine we walked to the entrance with a certain Colin who was our guide for the day. We were a somewhat unusual group; all Cornish regulars had already done this one, so beside Colin there were three more chaps I'd never been underground with before. 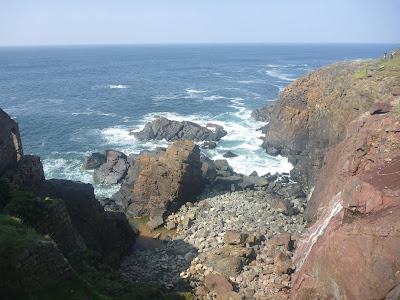 The beautiful beach where the entrance is 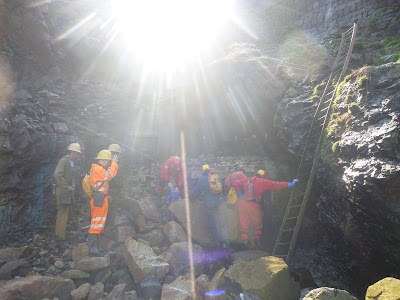 We're going in!
This mine had been operational until very recently, and then turned into a museum. We, evidently, went where the tourists don't go, but it was a very special trip, as we don't get to see so much modern-ish equipment. It was a beautiful place! I was feeling quite tired still, but apart from that I was having a ball. 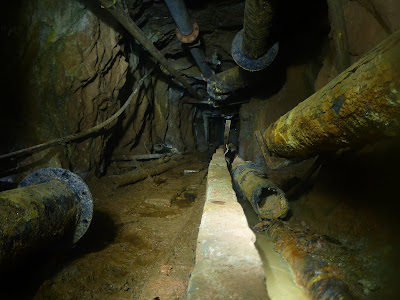 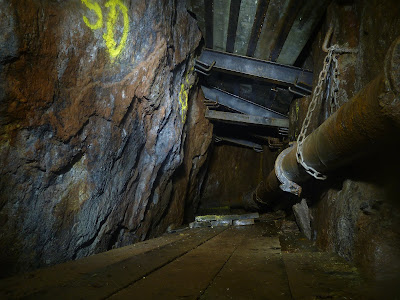 After something like four hours we re-emerged, still into the glorious sunshine. Dave had important things to attend to in Plymouth, so we didn't stay to socialise, but shot off as soon as we were changed. When we drove off I felt fine! Ten seconds later I didn't anymore. The hangover was back with a vengance. And the roads were winding. The roundabouts multitudinous! One can imagine the torture. About halfway I had to ask Dave to pull over, and in shame I separated with my stomach content. Luckily I hadn't eaten anything that day, so that was trivial, but I was feeling decidedly miserable. Fortunately I managed to survive the rest of the trip. But once home I staggered to my bed and fell over. Two and a half hours later I woke up. Next time I drink too much I should seek out a more proximal mine! But I can't complain. I saw a beautiful mine, and the accompanied suffering was entirely self-inflicted. And now back to normal! 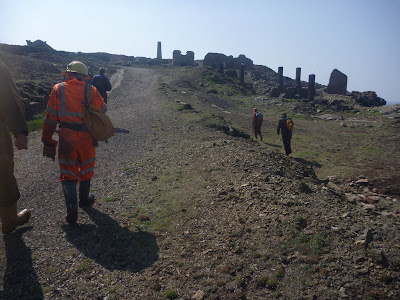