It is apple season! I have a reasonable crop this year. Initially, I decided to keep the apples on the tree, as I figured that would be where they would keep the longest. But there were creatures already feasting on them, and I had not forgot the year when my last apples had been stolen (I don't seem to have mentioned that on the blog). And the damage in an earlier year. So this year I decided to take the crop down and store it indoors. I hope that will turn out to be a good decision! I really enjoy having my own apple tree. And if this works I do it again next year! 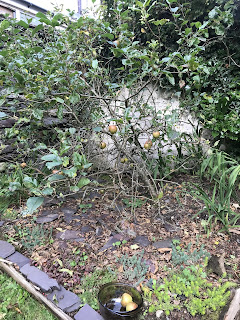