Five years ago I had done the biggest project in MATLAB I had ever done. I had really put some effort in! And I had substantial help from colleagues who are a lot better at coding than I am, but I had really given all of it a good try myself, and made the effort to try to understand what my friends had done. I had taken a somewhat outdated assignment, which was partially done in statistical software I don't otherwise use, and partly just by manual plotting, and reading values of a graph. I figured that needed updating! And with help it worked.

The year after I managed to put my new data through these scripts as well. And then I stopped gathering new data, as I was not given enough time on the fieldwork to produce anything meaningful. That meant I didn't have to bother with these scripts any more! I could just use the data I had already processed. But then everything changed when we went to a different location. The data suddenly had a different format. And I hadn't used MATLAB in years!

When the data came in during the fieldwork I knew I would have to process it. But I didn't have an awful lot of time to do it! It has to be done, though, so I did open the scripts and tried to change them to the new format. Of the four scripts, I managed to make one work. Then I knew I would not be able to spend the sort of time I would need to get the other 3 to run as well. So I asked for help! And my marvellous colleague Yueng was willing to lend me her skills. And in no time she had the scripts ready for the new data.

What I now need to do is play a bit with the data, and that means playing with the scripts. It is a bit of a steep learning curve! Coding doesn't come natural to me, but if I manage to make something work, it is wildly satisfying. I hope to get sufficiently comfortable with the software to be able to adjust scripts without help, to any of the requirements I might have. We'll have to see! 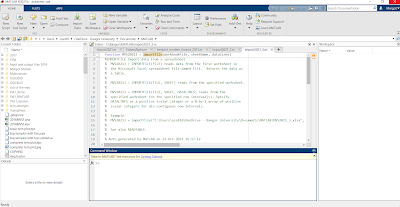