We had been stuck at a vertical step in the ceiling in the dig for months. I didn't know that was what I bumped into in July, but slowly it would become apparent that that was what made progress so hard there. I came across a pile of rocks sticking out towards me, and in September I started tackling them. It was a difficult bit to clear! It took ages. In December it became clear that the issue was a vertical step in the ceiling. That had made the density of rocks high and the risks involved in removing them too. We also thought it was a small step, fooled  by a big slab that looked ceiling-ish.

We managed to do some clearing out, and then support the ceiling-ish slab. We were now ready to try to get past it! As usual, I was up first. I had another look. I had initially thought we might chip a bit off the ceiling-ish slab in order to get past, but actually, the passage was big enough. There was just stuff in the way! One big slab, and lots of small ones. I noticed I could already bring some of the smaller ones down, so I did. When Miles arrived I showed him I thought we needed to get rid of the largest rock on top of the ceiling-ish slab. He agreed, and set to work. I kept a strategic distance; far enough to not be affected by dust or falling rocks, but close enough to keep an eye on what he was doing. It looked a bit scary! But after some clunking and wrenching and making funny sounds he managed: the big rock thumped to the ground. Success! I pushed it down the slope.

Miles had a look at his results. He didn't like it one bit! Lots of loose stuff. He was starting to ponder outrageous solutions to get rid of it. He surely didn't like the thought of bringing it down. But he wanted a bit of a change anyway, so he followed the big slab down, and started to chop it up a bit so it would be easier to throw it all the way down.

I had a look at what the situation was too. A lot of smallish stuff! Nothing bigger than about 40 x 25 cm. But it was important to make sure it wouldn't fall on me. I folded myself as far out of the way as I could, and grabbed the bar we had ready. I started prodding! And it worked rather well. My strategy worked. Everything just fell past! And nothing needed much encouragement to come down. It went well! So well the pile underneath me got rather big. It approached critical taper, which meant it was at risk of sliding onto Miles. I asked if I could do some pre-emptive shoving! And he was OK with that. Then I suggested he come up to have a look.

He doesn't like going up the final slab too much, so while he was doing that I couldn't resist climbing into the void I had just created. It fit! And felt safe. And I found the actual ceiling again! We had broken the back of it!

I got out to show Miles. He didn't know what he saw! He thought we had hit a really different bit, but it was sorted in minutes. It had probably looked more difficult to him as he wouldn't have been able to effectively fold himself out of the way! And that's one of my fortes. He had used his forte (strength) to pave the way for me emptying out the whole space. What good collaboration!

At the ceiling itself it was still a bit challenging; the rocks there were generally too big to pick up but too small to blow up. Oh dear! But we'll find a way. We always do! And I think next time I'll just go back with a crowbar. With being right underneath the ceiling, there now is little risk of things falling on your head! I'm sure I can make good progress! And I hope we will be scooting along the ceiling again soon! 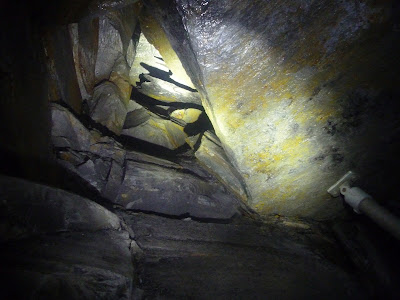 The new passage past the supported slab; the surface with the finger-shaped shadow is the ceiling