We have some people in the School that have been there longer than I have lived. One of them is our salty seadog Big Gwynne. He is in charge of the small boats. And it seems like there's nothing he can't do with them! I never used a small boat for my work here, but I knew Gwynne. Everyone knows Gwynne! Always ready to have a nice cup of tea and a biscuit and tall tales and some pulling your leg. And he was always willing to speak Welsh with me! Which was appreciated. But everything must come to an end, also Gwynne's career here. And there was a small do in the coffee area. He got a speech, and some leg-pulling presents. A mug and a packet of biscuits; a framed picture of him leasurely steering one of the small boats; a pair of waders (attire he frequently dons to get to his boats) with messages on them. And a stack of money he could spend according to his own wishes. Probably fishing gear; he's not going to stay away from boats in his retirement! 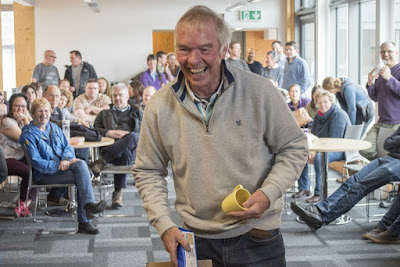 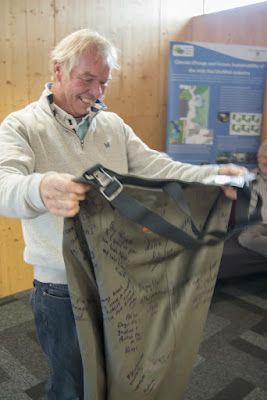 At five he went to the pub with who wanted to join him there. I went! I hope he has a great time in this new phase. And I hope to see him again!
Posted by Margot at 09:38