Earthquakes in Nepal, Earthquakes in Kent... It's not comparable. But they were both in the news, and they are more in the forefront of everybody's mind than they usually are. And now even more!

I was just sitting in the office, doing normal office work, when suddenly the building shook. My first thought was a heavy vehicle thundering past. But it was too much! It had to be an Earthquake. I've never felt one before!

The whole corridor erupted in excitement - or should I say, all the geologists in the corridor erupted with excitement. My biologist neighbour didn't seem to care, the physical oceanographer further along hadn't noticed... but me, Jaco the sedimentologist in the opposite office, his geophysicist neighbour and Martin the coastal sediment dynamics man were scampering all over the place, looking for data from the nearest seismological station, which turns out to be the local nuclear power plant. Which we found! 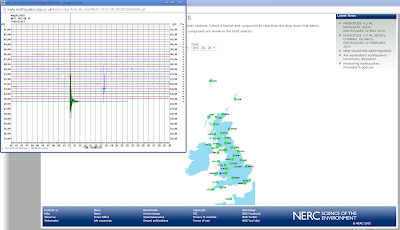 So what was it? It was a quake of 3 on the Richter Scale, its epicentre was just offshore at the western mouth of the Menai Strait, and the quake originated from a depth of 6km. Spiffing! It must have been the same forces that created the much heavier 1984 quake, which features in one of my lectures. It doesn't look like it was the exact same fault, as our epicentre was further north, but it is the same fault system. Geology in action!
Posted by Margot at 09:51