I did two exams in two weeks. I tried to revise a bit before both. And then, almost immediately afterwards, I went on fieldwork. That's a case of long working days and little time for other things. It also is a rather English business; I overlapped with our Welsh geophysicist for only an evening, and some of the support staff speak Welsh, but I didn't see much of them. The one I spoke with most was one of those who scared me off (accidentally, hopefully) during earlier attempts of communicating in Welsh, and once scared off I struggle to return to try again. So altogether, I didn't speak Welsh for the entire week. Nor did I read any. I don't think I've had a week like that since I started!

When I got back I saw Jenny again, and I had to get back to speed. Amazing how quickly you lose your skills if you don't practice. Luckily things immediately sped up; I told her that I thought I'd register for the A level exam. These are only done in summer, and I have only one summer left on my contract. This might have to be it! She thought I could do it. So far she's never been proven wrong. But she told me that you have to do some project of speaking 20 hours of Welsh with someone, and make a portfolio of the project. You also have to read two books, and they have to be approved of.

I'd better get started soon! I will have some time on the boat for reading. I might as well bring A level-approved books. There was a list. By sheer coincidence, I would do a pub quiz for Welsh learners the next day, and she would be there, so she would bring all the paperwork.

The quiz was fun; I went with Marjan, and we had a good time. Our team was a bit too big, with people on the edges struggling to keep up with the middle, but well, there are worse things. And I saw Jenny, who had forgot all the stuff she would bring. Oh dear! We agreed on meeting again the next day. This way I'm getting back into it rather fast! And the next day I did get the information booklet on the exam, and a booklet with next year's courses (she figures I should not only do the one I'm doing but the next one up at the same time). The first booklet had the reading list, but also the contact details of the person you'd have to get permission from if you wanted to read something else. Time to trawl through the choices; I could still order stuff and have it before departure!

In all that rigour there was one drawback; I had lost one of my main practicing partners. I try to practice underground, and Phil is my main ad hoc tutor. And he had crashed his car, and wouldn't venture underground for a while. That that affects my Welsh is a trifle compared to what it did to his current quality of life, but still. On the boat I wouldn't see him anyway, and I hope that once I'm back on land again, he joins us again, albeit only for calm and responsible trips.

Anyway. It will have to be written Welsh for a while! The ordered books are coming in. Fun to be had! 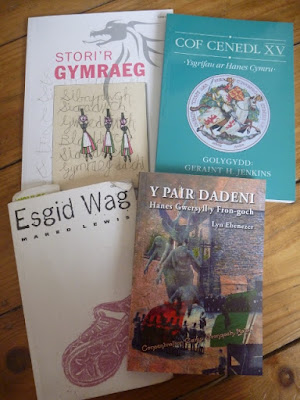