Long visit to the Netherlands

On a Wednesday afternoon I stood on Schiphol airport, and my passport was applied for. Time to venture into the hinterland! I had to stay for quite a while since passport-making takes a while, so I had time to see some people, but on the other hand, I also had had to take more days off work that I had wanted, and I had an exam looming. So my plan had been: see some friends, enjoy that, but refrain not from sitting in a corner once in a while and either read scientific literature or practice my Welsh. And so I set off! And of course I would see family too; a whole lot of it in fact, but I’ll poor that into a separate blog post.

I would spend an afternoon with Monique, and that evening have dinner with Floor, and spend the next day with Roelof. This turned into a philosophical time. We might all be either almost-forty or fortysomething, but we're not necessarily people that get things right from the start. Monique was pondering her relationship, and her approach to other people in general; Roelof was pondering the whole world in ways that made my head spin, and Floor makes my head spin whatever he does, and makes me ponder choices. 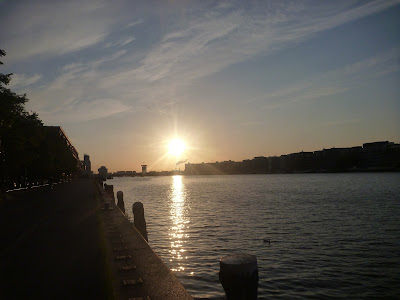 Walking along 't IJ after dinner with Floor

But there was some simple entertainment too. With Monique I had a nice Belgian beer in an ancient pub with a flirtatious pub cat, and with Roelof I went for a nice walk in barely charted Amsterdam territory. And we went to the movies in the new film museum. Very nice! And between Monique and Floor I popped into the Amsterdam library; when I left Amsterdam, it was still in a building on the Prinsengracht, but in the meantime it had moved. I don't live there anymore but I was glad I could do something about the omission of not having been to their current location. 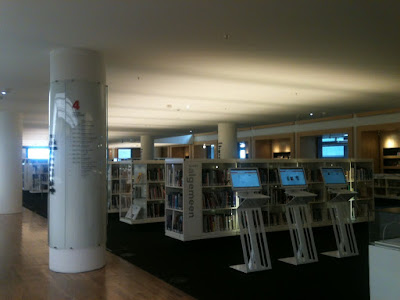 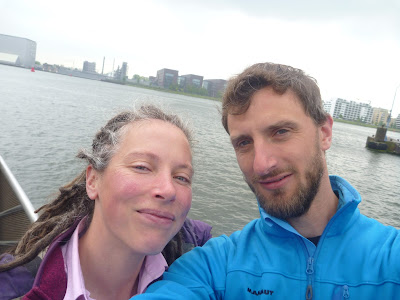 Taking the ferry to Noord with Roelof

Last but not least I had dinner with Henco and Maaike. And they said what Roelof (in a slightly less philosophic mood) had said too: it would be good to have another zomphop (swamphike). We hadn’t had one in spring as had been a plan, due to teaching commitments, and the autumn before had been worse. So no hop for too long! As soon as the dust has settled I am going to email around.

It was good to see friends. I hope to see them again, on home ground, in Autumn! In what we have much of:beautiful nature. But I got some of Amsterdam's culture to keep me going!