On Friday I asked my Dutch colleague Jaco, who occupies the office opposite me, if he wasn't coming to the CNS party. He wasn't; he said he had visitors. The next day would be his birthday, and not just any birthday; he would turn 50! I pretended to suddenly remember that was the case, and congratulated him. I felt a bit bad; I'm such a con artist. Of course I knew that! I'd been roped in to his surprise birthday dinner. But I couldn't let on, of course...

The next day I had a Welsh exam preparation class in Bangor. I figured I wouldn't feel like first biking home, and then to Caernarfon; better go straight there. I'd need a lot of time to get there, as it was a very windy day, even by Welsh standards! And of course I had to head straight in the direction the wind was coming from. And I didn't want to arrived too smelly. And I didn't think sitting in a Caernarfon pub, reading a bit, would be such an unpleasant way of spending some excess time. So I set off! There is a cycling route all the way from Bangor to Caernarfon, so it would be nice and low on traffic. This route largely follows an abandoned railway, and is indeed very scenic. 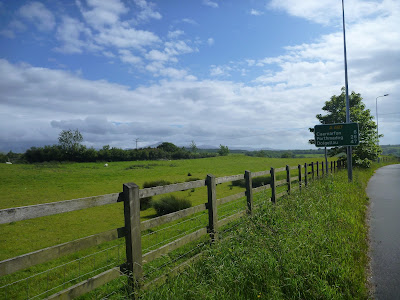 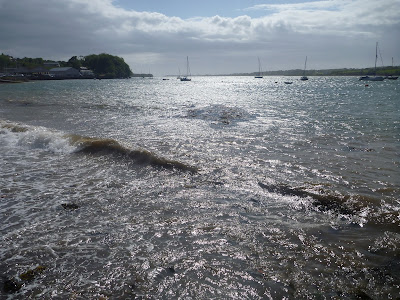 The strait was a bit choppy

I had about an hour left. I thought I'd just drink a beer in a quiet corner in the restaurant, but that was naive; it would only open at six, which was the time we'd booked our table. I retreated to a nearby pub and had a nice time. Then I headed back, six sharp! 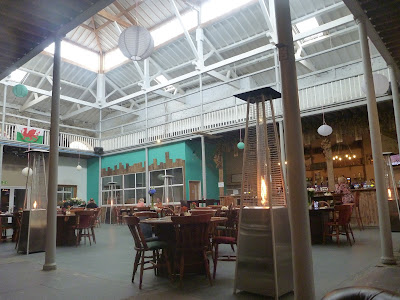 The pub I waited in 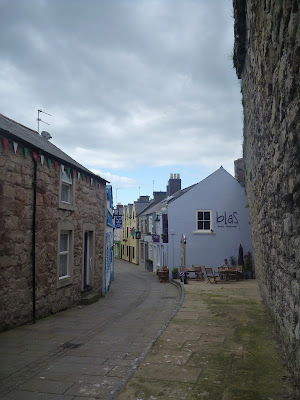 Blas (taste in Welsh), the restaurant of choice, which is built against the city wall 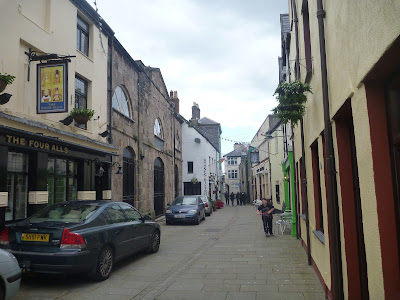 Shouldn't they make this street a pedestrian area?

It had clearly opened a bit earlier. Everybody else was already there! Time to kiss the party animal and his wife, and be introduced to the others, which I didn't know yet. The others were his aforementioned two guests from the Netherlands, and a couple consisting of a Fleming and a Welshwoman. This meant we had 7 English speakers, 7 Dutch speakers (the Welsh lady had her Dutch GCSE), and 5 Welsh speakers of sorts. An interesting blend!

It turned out that when Jaco realised there was one person still missing he figured that person was probably me. But before that my fakery the day before had worked! I must say, being openly festive in sunny Caernarfon is better than faking lukewarm enthusiasm in a gloomy office. The restaurant turned out to be really nice! The food was really good. I had horse radish soup as a starter, and lamb rump as a main course. It was spiffing! The others had similarly spiffing dishes. And the mood was befitting the occasion. 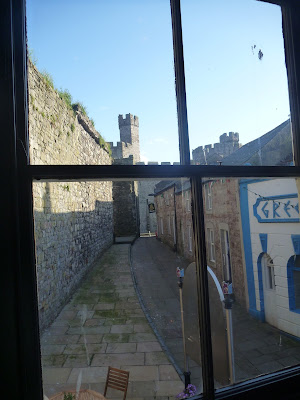 When we were done we got the bill unsollicited; our table was needed for the next bunch of people. That's OK; we could just go to the pub. We went again to the Anglesey Arms for another drink. By then the wind had died down, the clouds had vanished, and it was a beautiful calm evening. It was great to walk along the strait! And a post dinner drink is always nice. 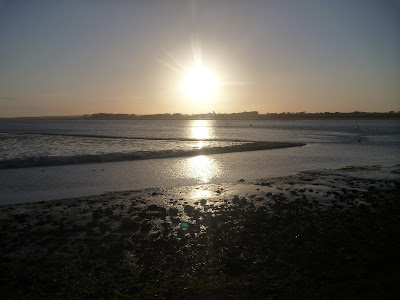 View from the front door of the Anglesey Arms

One drink was enough, though, for us moderate people. We dispersed again. Time for me to bike back! Even though it was 21:45 it would be light for quite a distance. And now knowing the way and not stopping for pictures I was a lot faster. I only managed to miss my junction, which lead me to make a 4.5 km detour, but hey ho. A good night for me anyway; hopefully an even better one for Jaco!