Go east and down

The Thursdaynighters tend to keep to themselves, but this week we'd liaise with some easterners, looking for a lost stope. It was supposed to be somewhere near Abergele.

The easterners would head up ahead of us. When we were all there and kitted up we set off, and found them quite quickly. Time to go search!

We went to a gunnis, and checked if it lead anywhere. It didn't! Then we checked a cliff for possible entrances. Nothing! But then Ali, one of the easterners, called on modern technology. He knew of a website that had directions. And with the help of that site we finally found what we were looking for. An adit with a tight entrance! 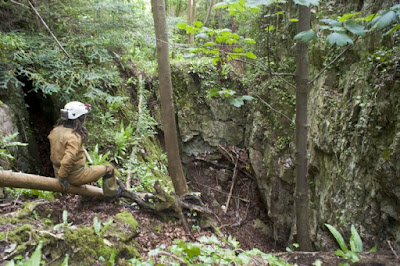 Dave, who is of modest stature, tried first. He struggled. I then tried too; he said his ribcage was the biggest issue, and mine may be smaller. And indeed: I slid through like an eel! It might have been the angle I chose, though. I scampered in; it seemed to go! There seemed to be a way down, and it went on further than I wanted to venture without getting the rest. I came back. And now the tone was set, and more people came through.

We explored the way down (didn't go) and ended up at the far end. It actually didn't go further than I had seen! Unless one was suicidal and willing to free-climb a wall of deads. Not my cup of tea.

By that time David had made it through, and wanted to document the occasion for the broken men. He sent me partway up that wall (I was OK with going that far) to light up the higher bits. But when the pictures were taken we headed back. Not much more to see here!

We had cake; the easterners had brought some (and, more importantly, fresh coffee!), and, of course, Mick had managed to get us some too. He had brought it to Phil, and David and I had stopped off on the way to pick it up. Intricate logistics for some cake! Which was a liberal design. Oh dear. But even though we had to deal with all that cake (some of which anatomically correct) we set off early-ish. I was home a quarter to eleven! My kind of trip! 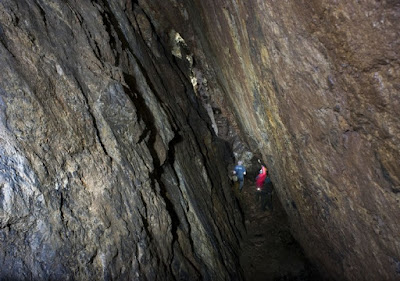 The stope was narrow, high and inclined 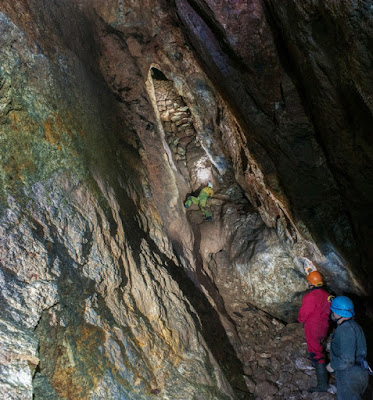 Me precariously lighting up the ceiling. All pics by David.