Deep into a lead mine

Paul was going to show some new mine explorers around in a local lead mine, and I thought I might join. Exams were over, Laugharne and cruise were looming, so I might now have a small window of some relaxed mine enjoyment before I would be above ground for a while.

Paul, David and I drove to Llanrwst where we met Chris. The idea had been he'd take his son Ethan along, but he had been misbehaving and grounded, so it would be Chris alone. At the mine itself we also found Edwyn. Off we went!

Chris didn't do SRT, so we would have to stay on the same level. We pottered in, took it easy, looked at stuff, even tried some tiny little side tours you can do by clambering into the stope, clambering past a few ore chutes, and then clamber down the next suitable one. After a while we reached the ladderway up the flat rods, we went up there. By then it was time for a brew, but we decided to do the flat rods first. We heard voices when we were in the shaft the flat rods lead to; I said to David it would be hilarious if we would find Linden there, given that when I was at the bottom of this very ladderway in November 2014 I had bumped into that very chap.

The voices didn't approach, so we figured they may be waiting for us; we went back. To find Linden. Funny! We exchanged some smalltalk and we were off. We were looking for a good lunch spot, but found nothing for a while. In the end we came to the series of collapses I had only been to once before finding anything good. We decided to just settle for the junction behind the collapses for lunch. Paul's stove was put to good use!

After (late) lunch we went on, past the ore chute deviation trolley thing, and beyond. We found another ladderway up I'd never up; it was great! It went all the way to the top. After coming down we soon reached the end of the drive. But a ladder lead up a level; we had a look. It went into a stope of which the false floor had come away. The end for us! It was getting late. We also had to see Mick. We turned back. 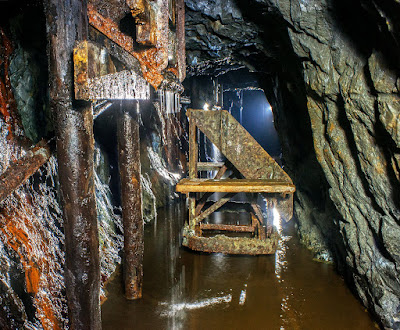 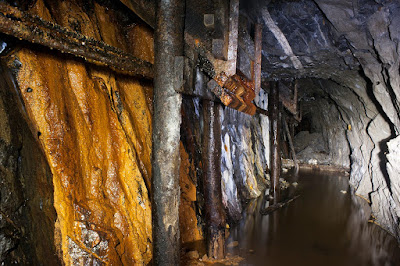 We moved back rather quickly, and came out in the sultry weather. That it was already 6PM didn't stop the men from wanting to see the hole into which Parc drains. It was 7PM before we were back at the cars and I had Mick on the phone. We said goodbye to Chris; he'll sure be back! Edwyn also went home, while we aimed for Blaenau.

We got some fast food and went to Mick's. He looked spiffing! Which was even the more remarkable when he told us that when, during a check-up at hospital, he had been ordered to not move and get mentally ready for a helicopter trip to a specialist clinic, he hadn't been on the brink of paralysis as I had thought, but of death. Oh dear. Now he was happily pottering around. He's making amazing progress! He had been given the OK to start driving again soon, and that way his action radius will increase. We should do some Thursday Night surface trips he can join!

Of course I was home later than I would have wanted to, but it had been nice to see Parc all the way to the far end. And it had been good to see Mick!
Posted by Margot at 15:58