Quest for a passport

How do you know you need a new passport? When you have some work trip coming up which requires your passport to be valid for 6 months! This is certain to occur 5 months before your passport expires. The previous time it was AGU in San Francisco which sent me to another country to pursue a document of identification, and this time it's the upcoming cruise. And the previous time that other country was sensu lato; I went from England to Wales. This time I went a bit further; I came to the passport desk on Schiphol.

Getting there did come with a challenge; I had a flat tyre on my way to the airport. Luckily I tend to make sure I have a bit of a margin, so I just got out the spare wheel (a bit faster than the previous time, though) and still made it on time. And the plane wasn't delayed either. So far all well! 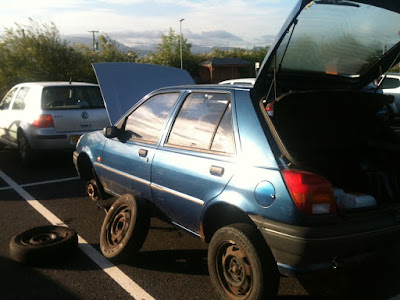 Not an ideal sight on the way to the airport

I had booked my appointment 2 hours after touching down; I figured I would still be able to make it even if a bit of fog or such like would get in the way. As there had been no fog I popped by immediately to see if maybe they could sort me out now. They couldn't as they were just changing shifts, but they were willing to check my pictures. They were not approved of! Too bad; I liked them. David had made them; it's handy to know photographers. But the Schiphol people decided  couldn't see enough of my ears. So while they changed shift I had new ones made. Not as good, but with more ear! I knew I would miss some detail in that extensive document on passport picture requirements. Anyway. The rest of the stuff I had had to bring was OK. 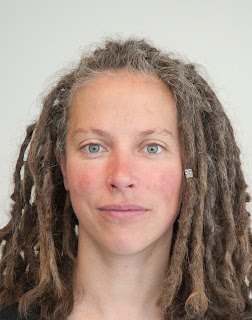 With the new pics I came back, and then all was sorted rather soon. Time to book an appointment for collecting the next specimen. I was hoping to do that on the day I would fly back. But no! They didn't have any appointments left. It had to be Monday morning, 8:10AM. Earlier was possible too, but nothing else was available. Well, 8:10 AM then! Not ideal but a lot better than having to fly in another time.

Picking up the new passport went smoothly. It even looks alright, even with the new pic. And this time it's even valid for ten years! That will save me some hassle. And my prediction is that I'll be going on some important trip in nine years and seven months...
Posted by Margot at 21:51