A Flight of Curlews

There are so many books to read, and so little time! I then I re-read one. But it was a good thing.
I am trying to introduce Hugh to Dutch literature, and indirectly also to the Netherlands, so I had given him Beyond Sleep (nooit meer slapen) by W.F. Hermans. A book that excellently combines the Netherlands, Norway, literature and geography. What more would one want? But being quite a fan of Maarten 't Hart I figured he needed one of his books too. The oppressive totes tantrism in his books would show Hugh. Side of the Netherlands he wouldn't previously be aware of, and the recurring topic of a socially uncomfortable scientist would perhaps be greeted by everybody working in academia. So I got him of of the few 't Harts books that had been translated into English: a Flight of Curlews (een vlucht regenwulpen).

You get the most out of a book if you can discuss it after reading. I had read it before, of course, but long enough ago to not remember the details. And some of 't Harts books tend to blend together in one's memory through time. So as I had a copy myself, we set out on a synchronised reading spree!

I enjoyed that book. I indeed had forgotten a lot. It's still a beautiful story on a shy little kid in an outrageously protestant family, growing up to be a somewhat difficult scientist. And it was interesting to see this time what translation can do. I leafed through Hugh's copy; I must say, I strongly prefer the Dutch version. For instance, Maarten's vader swears in a strange way in English (by thunder!), and his mother isn't half as helpless in English as she is in Dutch (Ik weet het niet meer, Maarten...) What I really found strange was that the birds in the title are curlews, (wulpen) but the birds that fly over when his mother dies are whimbrels (regenwulpen)... why not whimbrels in the title too? And one thing I wondered about afterwards: in the Dutch version, Maarten comments that a fellow scientist calls him "Martin". In the English version, he IS called Martin... how do they solve that? I should look that up next time I get my hands on the English version again... 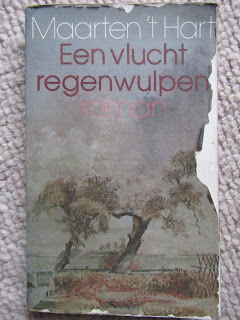