A grand evening out

Put the lady to the test! I can buy a dress and a pair of heels, but can I do the proper lady thing and clic-clac to a cab, be driven to a posh restaurant, get out of the cab in an elegant manner, clic-clac to the table, dine in a sophisticated way, clic-clac through the restaurant when the nose displays an unacceptable lack of powder, smile sultrily while the bloke pays, and then clic-clac back to another cab and be transported home? The answer is: ... (dramatic silence) ... (more dramatic silence) ... (drum roll) ...

Ha. The time had come to try it out. I quite unladylike got into my outfit in about one minute, but then I managed to cross the street to the taxi, even waited until Hugh opened the door for me, and off we went. So far so good!

We would first have a drink in a pub near the restaurant. When we got there I had Hugh pay the cab driver, and got out in the proper finishing school way. I'm learning! We were just in time to see the sun set into the sound. And then after an anticipation-raising first glass we walked, over the slightly challenging surface of the old naval yard, to the restaurant. Still all going well. Hugh was impressed with how effortless I made it seem. We were looking like a million dollars; we even brought the average up. The River Cottage is far from a chavvy place, but it isn't top end either; they for instance didn't take our coats, and I ended up draping the way too long coat over the chair, trailing over the floor. And to my horror the table next to us hosted a youngster who had his Union Jack underwear on unimpeded display. Noo! 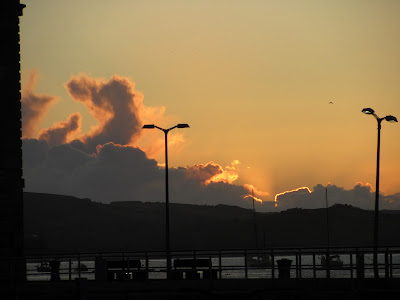 The sunset seen from Royal William Yard
I then noticed the coat hangers. So they did have them! Hugh immediately chivalrously offered to hang up my coat. And then I noticed something was wrong. My coat was there, and so was my scarf, but where was my bag? Nowhere in sight! I figured I must have been so overwhelmed by our own splendour that I completely forgot it in the pub. Hugh grabbed his coat and went back. He would get there much quicker than I would, on my heels! So in minutes he was back, with the bag and everything that belonged in it. What a relief. I'm clearly not entirely ready for ladyhood... but as long as you have a gentleman to solve your problems it isn't too bad.

The food was fine, the wine too, and I even managed the strut through the restaurant. So altogether I think we can count that as a success! It's a bit unfortunate I have the gastronomic refinement of a hog; given the choice, I prefer a plate of pub grub over haute cuisine. So for the food I don't have to do this, but it's fun to go in fancy dress and pretend to be a lady for an evening! Though next time I should keep track of my bag. It's not ladylike to have to sleep under the hedge because you left your house keys who knows where...
Posted by Margot at 16:43

You do look like a million dollars! I can only hope the trick with the bags over our heads still works.

Oh thanks! (Blush) And no it doesn't: you're slimmer, and you're tan!