I found myself a rather independent caver when I had my own helmet, light, and SRT kit. But what is an SRT kit if you can't attach it to a rope? Nothing at all! I always depende don club rope (of whichever club) or people's (read: Lionel's) private ropes. And I am a notorious procrastinator so it was likely to stay that way.

It wasn't. Lionel is much more pro-active than I am, and he wanted more rope. And if you buy in bulk it's cheaper! And Lionel likes cheaper. So he asked around who wanted some rope too. Me! So he bought 200m, and 60m of that are mine now. I bought a (offensively green) rope bag to hold the rope, and now I can basically go anywhere that's freely accessible (for keys I'll still need a club) and that doesn't involve more than one pitch, and one that's not deeper than, say, 55m (one needs some rope for tying to an anchorpoint). Still a bit restricted, when you think about it, but I'm enthusiastic anyway! Where shall I go... 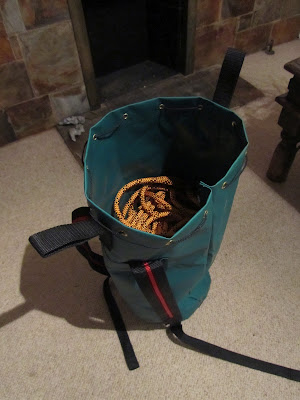