The past on the doorstep

According to the office of national statistics I live in a neighbourhood of maximum deprivation. Ask around in Plymouth, however, and you would likely find consensus on that it gets worse if you venture even further west from city centre, into Stoke and Devonport. According to some of my less subtle colleagues the people in my neighbourhood are already hardly human, which is a slightly harsh comment, but when I go for a run in Devonport I sometimes end up in areas where I think I might want to keep running for reasons other than my running shape.
Why would people who don’t live there want to go to Devonport? Maybe because of its past.

In the old days there was no such town as Plymouth as it is now. You had Plymouth, also known as Sutton Harbour (I hope I got that bit right), and Stonehouse and Devonport were separate villages or towns. In 1914 these were all united into what we now know as Plymouth, connected by Union Street, which I initially mistook as named after labourers’ organisations. Even though I live there I don’t know much about Stonehouse, but I know both Plymouth and Devonport have a strong history in sea trade and military activities. Both the army and the navy had barracks and bases all over the place. Devonport still has a large naval base.

Some people know such things in detail. And such people, and the people that aspire to it, would naturally gravitate towards the Plymouth & District Archaeological Society. And these had organised a guided walk through Devonport. So on a windy and cloudy Monday night I joined a fairly large group of history enthusiasts, thereby immediately lowering the average age considerably. These historically interested are quite punctual, though, and they had already started. 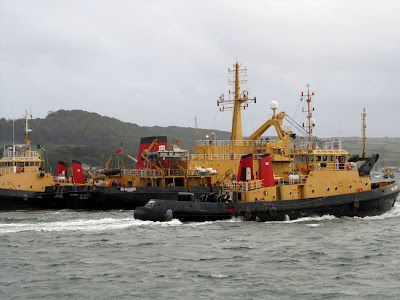 These were just random boats passing by, but they fit the ambiance 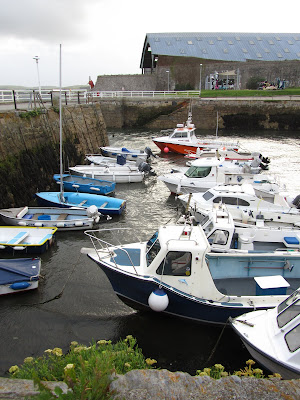 Mutton Cove harbour, with roofed slipway and stationary king
I missed information on what I think was the only roofed slipway in the far surroundings, and a big statue of some king or other, that had once festooned a prestigious ship. Later we came past what had been the ropery, and the Royal Laboratory (for making extra splendid gunpowder and the likes, it seems), and the actual dockyard, and the old Devonport town hall, and a column that should have had a statue of the king on it but didn’t. And then lots and lots more. There’s lots to see in there if you know what you’re looking for! Our guide, who worked for the Plymouth Museum, did. Luckily he also had a strong voice, so it didn’t get blown away by the strong wind. 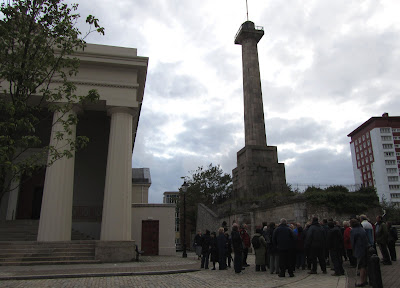 On the left the bleak neoclassicism of the old Devonport Town Hall, and on the right the column that commemorates the unification of "the three towns" into Plymouth, and which lacks a monarch on top. 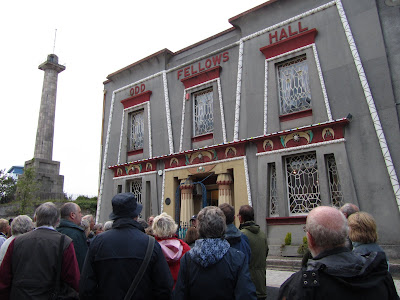 This odd-looking building once was very serious: it has been a prestigious school, and a library. Look here for a 19th century view. This style was fashionable back in the days...
Not only the wind got in the way; it also got dark a bit earlier than he anticipated, so he pointed out the last interesting structures to the chilled crowd by the light of street lanterns. In a way I thought this was the way to experience Devonport; battered by the elements, with the statue of Scott looming menacingly above you and the seagulls screaming. I had a good time, learned a lot, and also learned there is a longer Devonport Heritage Trail that I intend to follow some later day! 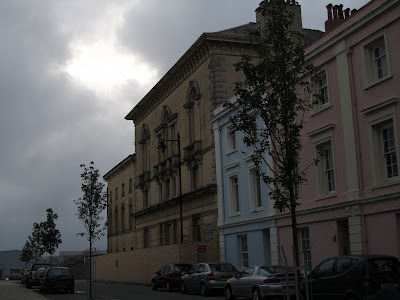 Yet another former library (left) and school (middle), this time in two buildings and under blackening skies 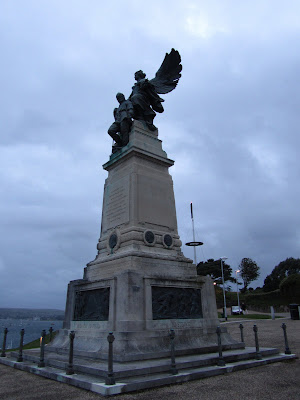 If you've lived in Norway you can hardly help but feel more reverence for Amundsen, but don't think I begrudge Scott his dramatic monument. 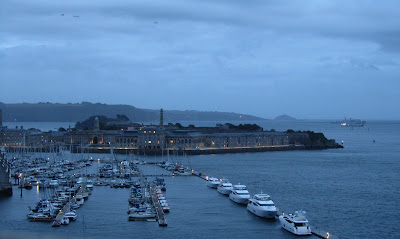 From Mount Wise, where Scott stands, you can see the sun set beautifully over the Royal William Yard 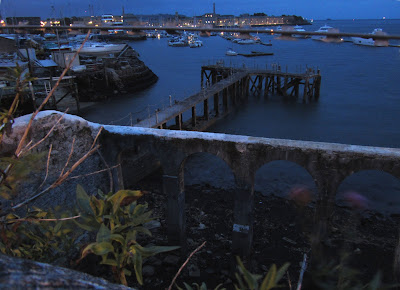 From Richmond Walk, a footpath outside the fortifications that allowed civilians to go from A to B in spite of all that inaccessible military terrain, you have an even better view on that. Here one also sees the Devonport Jetty and the remains of the boathouse of the Governor of Plymouth. 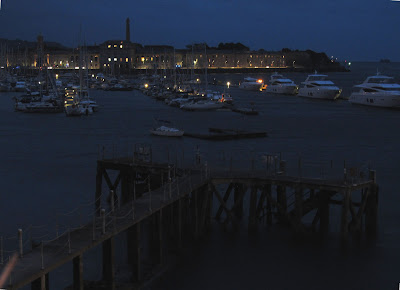 By the time it got this dark we went back to the starting point and dispersed... it had been beautiful!
Posted by Margot at 00:13