Looking good on the Hoe

Would I really be on my way to Wales when half the university would be prancing around in tuxedoes? No, of course not. Plymouth University (formerly known as the University of Plymouth; you can see why they decided to raise tuition fees to the absolute maximum. They need to pay for such ludicrous name changes!) tries to sell itself as “the enterprise university” and they hand out enterprise awards every year. And they do that during a glamorous ceremony on the Hoe. One that I would not be able to attend as I would be off to Wales. But then I got too busy and dropped out.
Roland had mentioned he would go; he was nominated for the “World Class Research Award”. How that would be enterprising is everybody’s guess, but I would be the last person to dispute the nomination. So he would have to dress up smart and, by his own guess, go there to applaud at someone else actually winning. And I regretted not being around to lie in in the bushes as a paparazzo and enjoy the tuxedo. 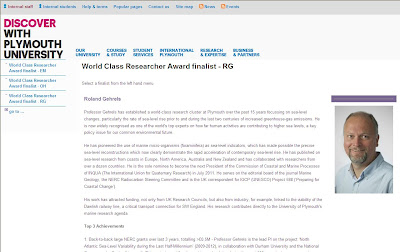 From the Plymouth University website: Roland the nominee!
Then it was the actual day. Having decided not to go all the way to North Wales (expected drive time: 7 hours) I was in the lab, when at ~17:20 I got a phone call. From Roland. He said he was about to leave home, tuxedo and all, but he didn’t have a bow tie. The ceremony would start at 18:00. So he wondered if I had one. Me? A bow tie? Try again! But I do have a bicycle, so I just asked Richard the lab technician, who was the nearest bloke, and fortunately one that had lived in Plymouth long enough to know where you can buy what, where I should go. I’ve never even seen him in a tie, but he did know. So ten minutes later I was in the M&S buying a most splendid specimen…

I was at the Hoe, under the scrutinizing glance of Francis Drake, in good time. No sign though of Roland and slightly pregnant Maria. Time ticked and ticked. I did see, to my enjoyment, lots of other people in their finest parade past. Then the music in the marquee already started. Somewhere after 6 I finally saw two familiar shapes... 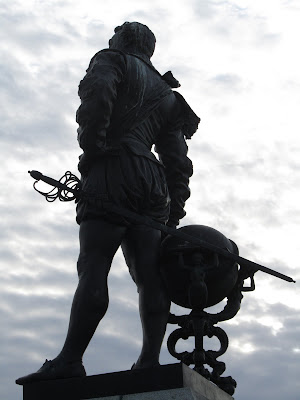 Drake looking serious near the entrance of the marquee
Roland told me they were asked to arrive between 18:00 and 18:30, so they weren’t really late. Maria bent over her substantial 8.7 months belly and put the tie where it belonged. Now they were ready for the ceremony! They looked splendid. 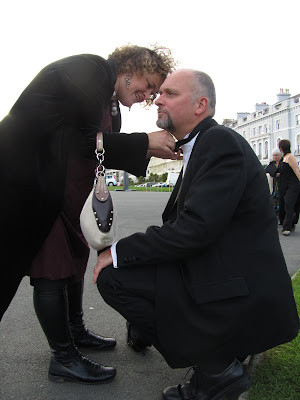 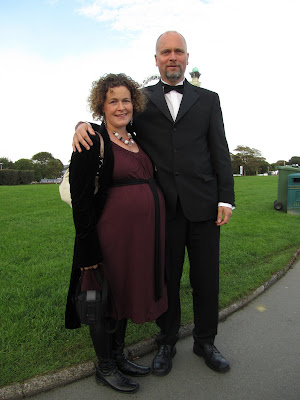 Aren't they beautiful (all three of them!)
﻿On the way back to the institute I saw the dean and the head of school get out of a cab; also in tuxedoes. And reaching the office building I bumped into one of our PhD students who was not only nominated for Student of the Year but also for Postgraduate Research Student of the Year. What a man! And wearing a tuxedo as well, of course. He was hardly in a hurry as he was even more convinced than Roland he wouldn’t actually win. 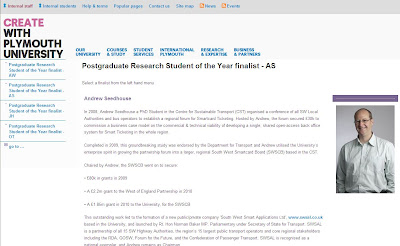 From the Plymouth University website: Andrew the double nominee!

Maybe this was Fate having mercy on me for missing out on a caving weekend. Men in tuxedoes don’t make up for that, but it does help!


PS they unfortunately were right - they didn't win. Too bad!

Yes, I wear a bowtie now. Bowties are cool!