Cave rescue, not only for humans

After catching up for half an hour with two of our quite eastern cavers, for whom quite many of our trips are far away, without seeing any other of our club, I started to believe this trip may be a hoax. And when neither Dave nor Lionel answered their phones that belief got stronger. But it wasn’t! The three other cars were populated by people who don’t read the emails giving information, and had parked at the wrong place. So quite some time later we all kitted up after all, and started the beautiful walk across the moors, and through long stretches of hardly traversable heathland, to the mine shaft of our preference.

Bold cavers in the rolling hills 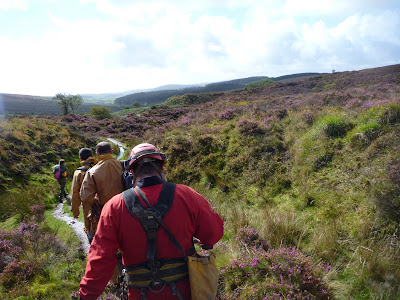 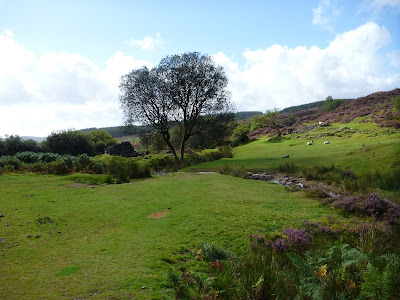 Notice the ruin of the mine-related building where the sheep are lying!
We got to the very overgrown shaft, rigged it, and went down. It was a shaft leading to a very narrow lode, which we descended on a rope too. Lionel was first (surprise!), and soon announced we had an unexpected host: an adder! I had never seen one in the UK, so I enjoyed his (or her) beauty. It was a youngster, so I wasn’t afraid it would have anything on us. It probably was afraid we were more of a threat on it. Which was true. It decided to ceaselessly stare menacingly at Lionel while we sorted ourselves out in that narrow passage. 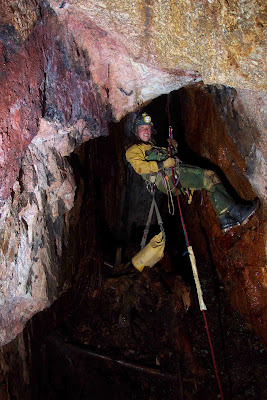 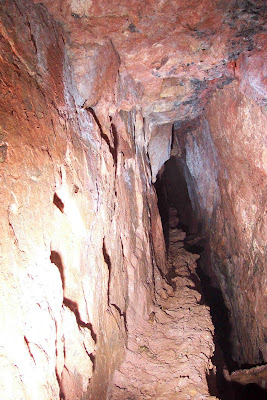 The lode-with-narrow-passage-above the first descent lead to 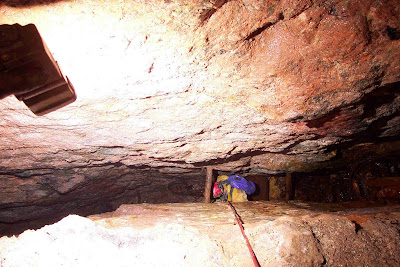 Lionel going down the second descent. Above three pics by Dave 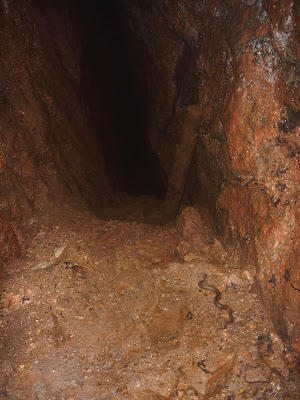 And what he found down there! 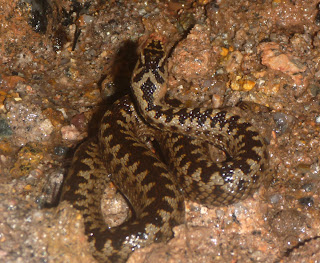 It was a pretty bugger. It's staring at Lionel when I take this pic. Before and after as well...
After the double descent we had unfortunately run out of rope, which made the descent of a next drop somewhat tricky, but we managed. Just tie some cow tails and belay belts together, make sure some tough guy holds onto the end, and Bob's your uncle. Even though on the way back up I ended up being the tough guy for Lionel! Luckily I pulled it off. And then the only way was into the water. I was the only one who felt like that, so I climbed and then swam across, climbed over a collapse, swam a short second stretch, and came to a dead end. When I came back the rest had already started to come back up. There was no more sign of the adder. 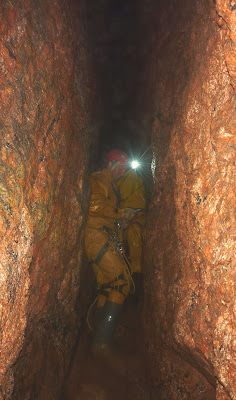 Lionel and Steve in the narrow passage
When we were all up it turned out that one of the men had decided a mine is not a place for a snake: it’s not warm enough, and there’s nothing to eat, except perhaps the odd caver, but they can be a bugger to catch. The guy had carefully put the snake in his tackle bag, taken it up the shaft, and released it on a nicely warm tree stump, where it spent its time hissing at Dave, who tried to take a picture of it. And then it was time to go to the pub. This had been a long anticipated trip, and one guy had even come from deep down Cornwall for this... It turned out as one of the shortest SRT trips we’d ever done. Oh well. At least we probably saved a hapless serpent's life! 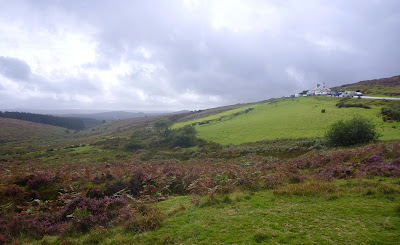 The pub overlooking the Moors
Posted by Margot at 07:34