There wasn’t going to be any mud. Nor any water. One could wonder where the fun is in that! But I saw the advantages in not having to change into cumbersome caving kit, and later change back again.
So what was the attraction in such a clean caving trip? We had found new adits! And exploring the unknown is always nice. Even though we had no reason to believe they would be extensive.

The woodlands that held these hidden treasures were quite scenic in themselves. There’s something about woods at dusk, and these had all sort of overgrown mining relics in them. And we strolled amongst them, in various cross-overs between caving kit and civilian outfits. 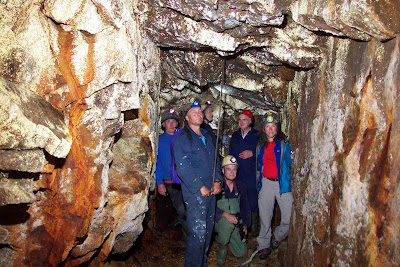 An incomplete group picture in the first adit. Notice me in my civilian clothes, and Lionel (with raised rod) without a helmet! Pic by Dave
By the time we got to the first adit it was almost dark. We had a look; it was just a tiny tunnel. But now we know. By the time we reached the second it was dark; this one was deeper, and had collapsed side tunnels, and Lionel considered a dig. Not that he needs any more of these than he already has lined up; not anywhere soon in any way, but contemplating digs is just what Lionel does. 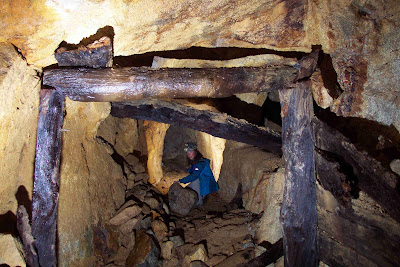 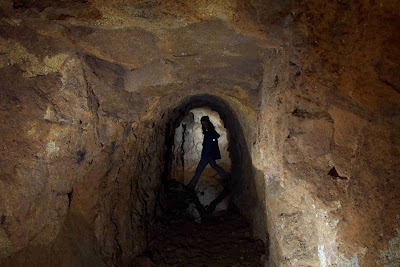 Me as a flash monkey in the second adit. Pics by Dave.
Dave managed to make some great pics in these small venues, and then we came out. 9PM: beer o’clock!
Posted by Margot at 14:13