Students on the Tamar

Campus had been an oasis of piece and quiet for months. But that wouldn't last...

Like an invading army the first year students engulfed the university. If you walk over campus now you have to slalom your way past the socialising youngsters. It's good students tend to be too lazy to use the stairs, for otherwise there would be the huge risk of ending up behind some young men whose sense of fashion would force them to wear their trousers at the approximate altitude of their knees. I think I'm officially a grumpy old woman, for I really can't get used to that sartorial offence.

Even in a year which is the last one before tuition fees are raised to the legal maximum it is important to give these up-and-coming academics a warm welcome. Next year we hope to still get some, in spite of the £9000, and a record of lots of students dropping out wouldn't help with that. And it's of course just the right thing to do. That first week will probably resonate right through the entire rest of their lives. It had better be good!

Induction week ended with a boat trip on the Plym and the Tamar, and Paul had asked me to join, so I did. One of the lecturers in human geography grabbed the microphone and provided a continuous erudite commentary on everything we sailed past. I don't think the students were listening, but I enjoyed it. I want that chap on the back of my bike, commenting on everything I bike past! 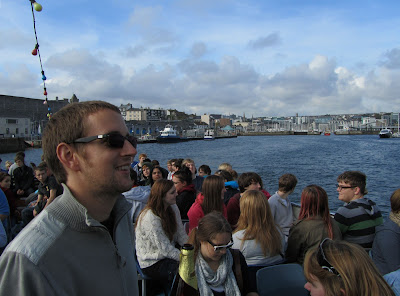 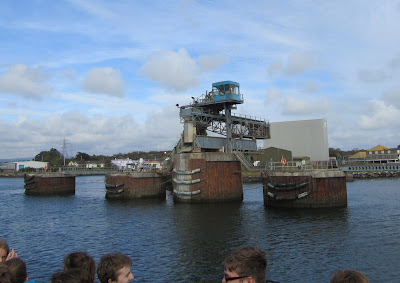 I've never been this close to this, eh, thing! 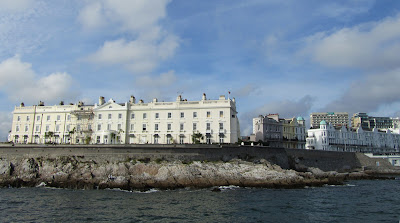 The waterfront holds some nice architecture 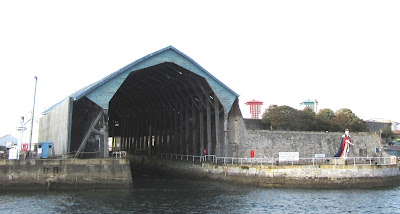 The roofed slipway I only glanced during the Devonport walk. Now I could see in! 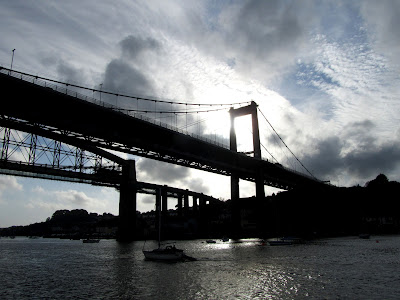 The Tamar Bridge in dramatic lighting
Whether they listened to the commentary or not, the students were treated to a nice boat trip in splendid weather, and a view on Plymouth from a less usual angle. And so was I. It was, in a way, the boat trip with Neil, but then with less testosterone and more human geography. And, in a way, also the water-borne version of the recent Devonport walk. A nice change from a hard week in the lab. And I won't be teaching these students, but it may be good to get to meet them anyway. I hope they're still there by the time I have to help Roland teach them about sea level change! And it provided me with a nice insight into their world (so different from mine!); I pointed out the citadel; a beautiful relic from the civil war, and they said "we know that place; there was a dubstep party there!"
Posted by Margot at 08:58