The second caving trip I ever did was in Pridhamsleigh. The next time it featured on our agenda I was a bit jaded: done that! But with caves of that size that's a naive point of view. I already got a taste of what it has to offer when we did a cave rescue practice there. We searched every nook of it... but in several teams; one person cannot possibly search the entire maze in such a short timespan.
On my birthday, the club had gone there again, and done some of the wetter bits, but I had been in San Francisco. But I love wet caving, so when Prid showed up on the meets list again I got all excited. Especially in these times of relentless lab work it's really nice to do something completely different, and jumping in an underground lake might just qualify. So I was eager!
Six of us showed up for this trip. And with these six we went straight for the lake! As I had hoped. Richard, who lead this trip, had said a wetsuit was a bit overdoing it, so I was in my normal caving kit. And that way it was cold! But I swam to the other side, and tried to find a way of taking a picture of all the much more sensible people on the lake shore. But taking pictures without slave flash in deep water with smooth walls without anchor points for tripods is a bit of a challenge, and it didn't work out too well. But I got freshed up! 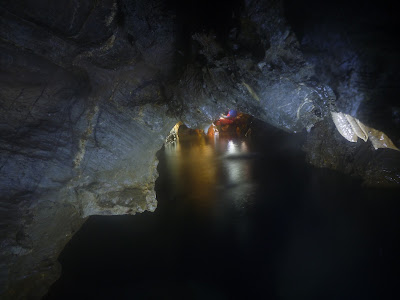 This is the best I managed: one and a half headless caver on the lake shore... 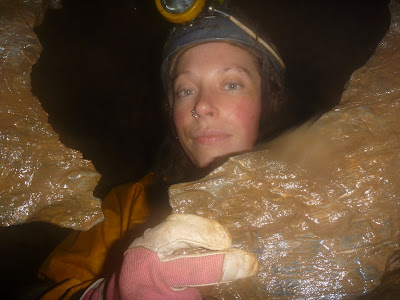 I found this piece of rock sticking out for mounting the camera on. Unfortunately it hang quite high!
After I'd swam back we had some more wet and crawly fun in all sorts of recesses of the cave. And we went to the flooded rift, where I'd been before, but that had been in the time I did not readily jump into very cold water. Now Richard wondered if it was or was not too deep to stand, so they sent me in. Ah well. I'm good for such things! And with some difficulty one could walk. So some of the men followed.
The end of the rift looks like a dead end, but Richard knew better; there was a sump! He stood there, doubting, for quite a while, but of course he went through. And I cannot resist such things! So I followed. Coming up on the other side I felt hands around my head, and was pulled to the surface; Rich was showing his midwife skills. And as nobody else followed, we went back soon after having come, and he did it again. It's good to be looked after!
With that we had had about as much fun as we had bargained for, so we headed back. I followed Adrian on the way out, and I saw he took an alternative route. Trough a traverse! NOOO! But he said it was good for me, and moaning as ever when I'm confronted with such an abomination I did negotiate it. And then we felt fresh air, and stood outside again!
I of course was soaked to the skin, so I ran back to my car, and changed as fast as I could. Huzzah for fluffy jumpers! And after the ice and water had been sufficiently removed from my car windows I drove to the Abbey for a pint. It had been a good night! I need some of that in these hectic times...
﻿
Posted by Margot at 11:58