The BBC showed an episode of Horizon in which they dealt with why it seems very many do not believe scientists anymore. They discussed AIDS and GM foods, but first and foremost, they discussed climate. And specifically, anthropogenic warming. You understand I was glued to the TV. 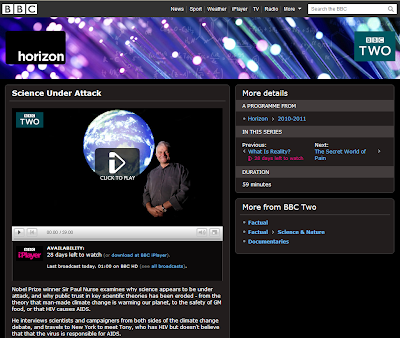 From the BBC website
Paul Nurse, a Nobel Prize winning scientist, went around the world wondering what had gone wrong. And he argued that the problem was that most people don’t have the expertise to judge science themselves. They have to leave that to others. Which others? That’s a question of trust. And for some reason, it often isn’t the experts that get that trust.

What people read is the media. And the media have a political agenda. And they will find a source of what they want to convey. The program showed some examples of confusing media coverage. Many people will know that there have been several independent evaluations of Climategate. All involved scientists were cleared. Nurse showed two newspapers that reported on that: one said something like “unreliable scientist gets to keep job” while the other headlined “scientists cleared of all charge”. One newspaper reported that human-induced climate change was a sham and all warming was caused by the sun. The other one headlined that it was now proven that it was NOT the sun. Not that strange many people in the street think scientists don't really know what's going on, while in reality it's others who get things confused.
If you want to find information that suits your purposes you will. There’s always cherry-picking people around. Nurse also met James Delingpole; one of the sceptics that revelled in Climategate. Delingpole claimed scientists are the ones with a political agenda. He said consensus is not science. It’s a set-up! They (we!) have just decided to come up with an alarmist message. He basically relied on two words from the Climategate e-mails to base his whole story on.

Nurse challenged the assumption that consensus is by definition a scam by coming up with the analogue that if his conversation partner would happen to get cancer, and medical scientists would have consensus about the treatment, he probably would not question that in such measure. Delingpole started to stutter, said he didn’t want to talk about that, and resented the analogy. Aha.

Delingpole talked himself even deeper into the mire by saying he didn’t have the time or the expertise to evaluate primary scientific data. But still he claims to be able to judge it’s all forgery...

Nurse concluded rightly that cherry-picking scientific data makes no sense, and that you need to keep an eye on all of it. That, however, is something only those who can dedicate their working life to can afford. That would be us! And that brings us back to the science communication thing. We have to get better at it!
Posted by Margot at 08:56

"And that brings us back to the science communication thing. We have to get better at it!"

This should help. And the Horizon broadcast probably doesn't hurt either.