"If my flight from Frankfurt to Heathrow gets cancelled, will my luggage appear on the belt?" "It will!" "Good".

It wouldn't. I may fly ridiculously often, but my flights tend to not end up cancelled. So I didn't know my luggage would stay put in case it couldn't be flown on to where it was checked through to. And the airline employees I asked were not going to tell me either. So I made sure everything that would keep me busy was in my hand lugagge: my computer, my external harddisk, my books, the newspaper... and with that it was full. I did make sure I didn't part with my jumper, jacket and scarf, but beside that everything else was in my hold luggage. Clean clothes. Walking boots. Sunglasses. Phone charger. Camera charger. Key card. Toothbrush.

And then, in Frankfurt, on the 21th, my luggage evidently didn't show up on the belt. I braved the enormous queue for luggage tracing, optimistically gave my mother's address as the delivery address, and went to Amersfoort.

My mother had a toothbrush and toothpaste for me. But I don't fit her clothes, so a shower would be silly. I would have to get back into the same sweaty clothes! And still with minimal luggage I finally reached Plymouth, midnight the 22nd.

The most annoying thing had been that I was trying to make my way through Europe with a pre-paid phone without charger. And in addition to that my creditcard had been blocked while I was in the States, so I couldn't top up either. But communication is a good thing when you're in a country you don't want to be in, with minimal luggage, and you try to get somewhere hospitable. Luckily both the money and the battery lasted until I found my sister.

I wanted to phone Lufthansa to tell them to bring my luggage to my permanent address. But the owners of the other 19.999 bags were trying to do something similar. But a few days later, on the 26th, I got through anyway. They had found my luggage, but not shipped it yet, and I could still change the delivery address! And on the 29th I received a phone call that it had arrived in Schiphol. That's a start. They said they would send it on to the UK that day or the next. And I would receive notice from the delivery company.
On the 4th I started phoning again. It had reached Bristol! But what would that means in terms of when I would see it again? The 5th I came home to find a note from DHL: they had tried to deliver it. Of course they hadn't bothered to phone me to make sure I'd be home. Typical. I booked a redelivery online; the first possible date was Friday the 7th. I had it brought to the institute. And at noon I received a phone call: it had arrived! Of course at that hour it was pissing down epically. But who cares! I was on my way to my luggage. 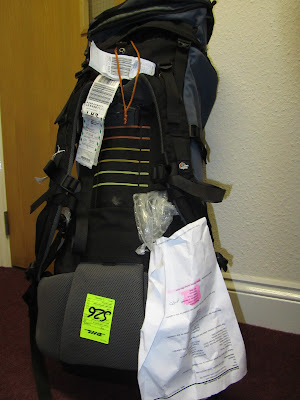 It was heavily festooned by the time it reached me!
In a way, it's good to be parted from one's stuff for a while. It's easy to come to count on things! And it came at the same time as a broken computer and a blocked creditcard. And trampled glasses. Margot survives without what is easily taken for granted in modern life!
Posted by Margot at 12:23