Last hole of the year

“I’ll follow this gentleman!” If it wouldn’t have been for Lionel I’d probably have spent the last day of the year in the office. But Lionel was keen on going underground, had tried and get a Ludcott trip on the rails, and when that failed had set his mind on some shaft near where he lives. We had agreed on meeting at a bridge. And I had parked somewhere where some lady feared I might be impeding tractor logistics. But just as she addressed me a black Saab appeared and I could reassure her with the words mentioned above that I would not impede anything, but rather abscond.
We parked somewhere in the woods, heaved our backpacks over our shoulders and set off. It was still a reasonable walk, but what better done on your day off than that! After a while we reached the first signs of the mine we were looking for. We found a flooded shaft in a very scenic depression. And an actual gunnis; a lode taken to the surface. And two shafts, one of which collapsed. From the more or less intact shaft we could see two levels heading off. Lionel rigged the lot and went down to have a look.

Unfortunately, the two shallow levels turned out to only reach a few meters into the rock. One was no more than that; the other ended in a narrow inclined shaft down. Beautiful, but not fit for letting cavers through!

He then went down to the bottom of the shaft. There as well was a level heading off, but it was flooded, so he came back up again. I then went down as well, just to have a look. And because dangling on a rope is always a pleasure. 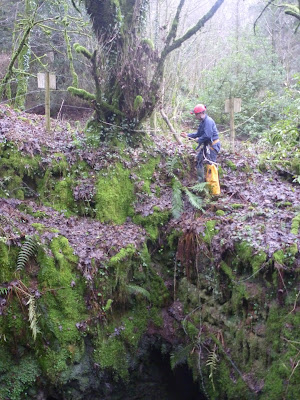 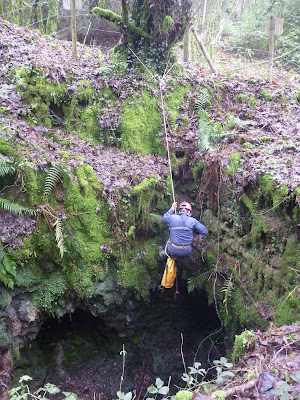 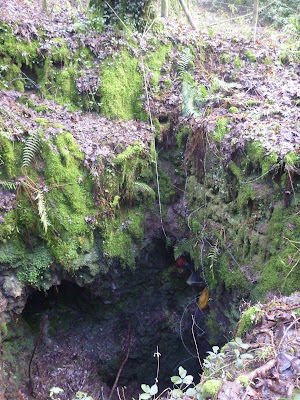 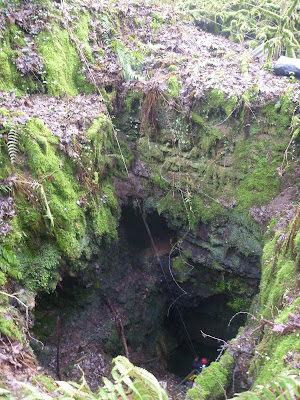 Lionel had another mine in mind as an encore. He said it was dry, an easy walk-in, not even a chance to get filthy, so he advised I’d get back into my hiking kit, which I did. Just to be sure I asked how dry that mine actually was. Completely dry, he said! Good. Hiking boots instead of wellies. And we walked a stunningly beautiful way back, with lots of mossy trees, scenic rivers and towering Tors. I had stupidly left my camera in my oversuit, at the bottom of my backpack, so quite atypically I took no pictures, but trust me when I say it was great.
We dumped our stuff in the cars, and went to the other mine. Your average adit! With about six inches of water in it. So that’s what “completely dry” means! Thanks Lionel. He tried to defend himself by saying it was completely dry by mining standards. It was way less than chest deep, after all!

It was a very pretty little mine, with several flooded winzes, and amazing white, blue, and yellow staining on the walls, so I regretted again the camera-less state I was in, but my readership may actually be relieved I don’t come up with yet more pictures of tunnels.

When we were done I went back to the following of the gentleman. Lionel offered me a cup of tea in his caving-pictures-festooned kitchen. A walk in the woods, a shaft, and tea served by a man in thermal underwear; what more does one want on the last day of the year! Nothing that the rest of the day wouldn’t offer…
Posted by Margot at 13:49