Last year it cost me more to get my car through the obligatory annual check than I had paid for it in the first place. So when it was that time of the year again I braced myself for the worse.

I went to a different garage. A nearby one, this time. The previous time I had taken one my insurance recommends, but I decided to not do that again. I delivered it first thing in the morning on Monday. They asked me if I wanted to wait for it. Wait? I hadn't brought a sleeping bag, you know!

In the lab Rob laughed at me and said that if I would have it back before it would be caving time on Tuesday he'd take me out for dinner. Rob, as one might guess, is not particularly impressed by my splendid vehicle. And then at 10.40 they phoned me: there were only 3 things wrong with it, and it wouldn't cost very much to do something about these three things. Yay! I love this garage. 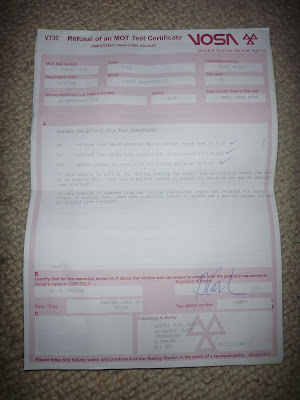 Typical! I intended to put the form that proves my car has passed the test on the blog. Was so absent-minded I took a picture of the pre-repairs, and thus failed, form...

Tuesday at 16.45 I collected it. The bill was only one third of what the entire car had cost me that year back. And as we don't cave before 19.30 it meant I get a dinner with it! Murphy rules, though, and that night I didn't go caving. I'll blog about why in another post. So it's a bit silly I have a flawless car, and it's just standing there in front of my house while I'm at work. On a Tuesday night. But I will get stuff done, and take my renewed Silverbonnet out soon enough! 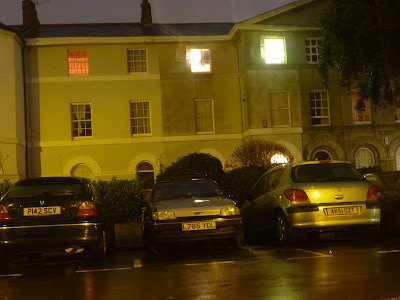