Mine in the garden

A good boss is a joy forever. Having a good postdoc can come in handy too, sometimes. You can use them as extra hands when you move house. And they can be used as private drivers! If you’re in the States and your wife needs to go to the airport, for instance, or when a friend comes over from the US with his whole family and needs to be delivered home from the railway station. Both occurred early this year; the latter concerned a friend of Roland's; Bill, that I had met in San Francisco, and he would come over to this side of the Atlantic for a sabbatical before Roland would return from his Christmas holidays. So I picked him up. With unexpected consequences.
His landlord invited us over for a cup of tea, and mentioned the silver mine in his back garden. A silver mine? I wanna go in! And Stephen, the landlord, didn’t mind. And now the day had come when we would indeed descend that shaft and find out if there was anything in there. I had ensnared Lionel, as I figured chances of us finding something were slim, and two suffices for dropping down and climbing back up. But Finbar wouldn’t let such fun pass him by, and neither would Dave, so we ended up with four. That is a lot of caver for a small cottage, but nothing our hosts wouldn't be able to cope with!

Stephen and Bill gave us a warm welcome, and Stephen walked us through his garden, where there was not only this shaft, but also the remains of a stack, a flywheel pit, an engine house, a possible dressing floor, and lots of mine waste in tips. While we were admiring all that Stephen’s wife was already yelling at us: “can I go down too?”. How she had managed to live there for 20 and suppress her desire to hurl herself down is a mystery. 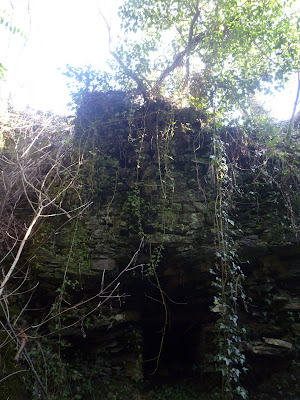 Picture taken from what is now the bottom of the shaftl, looking up to some stone structure with a culvert in it 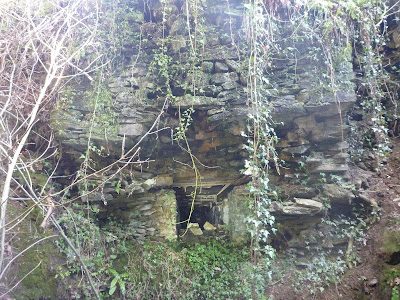 The culvert a bit clearer 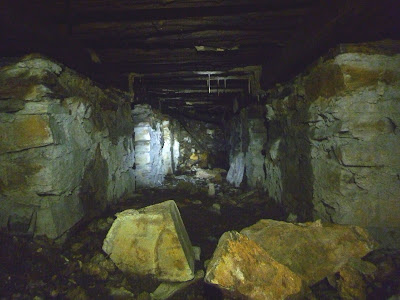 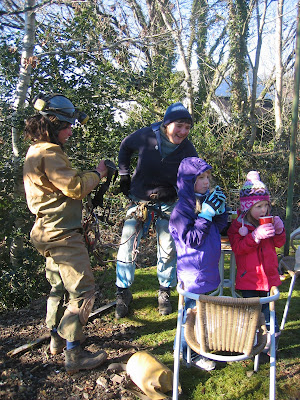 Me helping Liz into my kit; pic by Bill 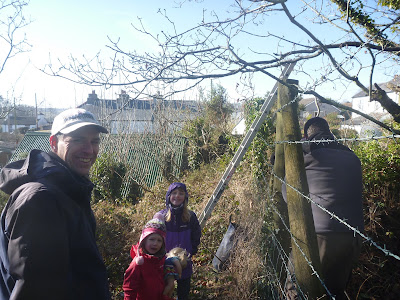 Bill and his two daughters; to the right of the fence, Lionel is fixing Liz to the rope 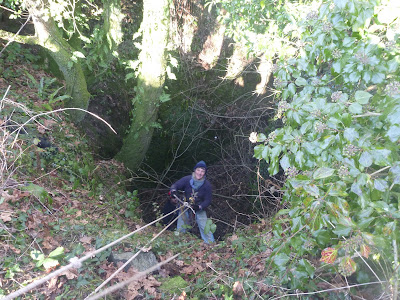 Liz having all the fun in the world in the shaft
We kitted up, fixed a rope, and then Lionel was down. Unfortunately, there wasn’t much down there; the shaft had been filled up too much. But all four of us went down for a look and perhaps some pictures, and then we helped Liz into my harness and coached her down into her very own silver mine. And then back up again! She had a blast. But with all that scurrying up and down (Finbar dropped a tape measure so he had to go down twice) it meant we had no time to do another mine that same day. But we had a great time; Stephen and Dave exchanged some of their extensive mining knowledge, Bill’s kids thought it was all very spectacular, we all happily scurried around in the sun and enjoyed coffee with scones and muffins.
After all that we adjourned to the pub; the very cosy one near Roland, where I had already been once, and where Roland and Rosa honoured us with their presence as well. Caving meets science. We ended the day well with making plans for doing another, more extensive trip somewhere soon!
Posted by Margot at 18:56