All was as normal. I would bike to some reasonably nearby caver, be picked up there by Dave, and we would go underground. But then Dave phoned he wouldn't come, and things would turn unusual.

This way I had to drive to his place, get the kit for new club members who didn't have their own yet, pick Ali up, and then go underground. Even that didn't work; there's roadworks between me and Dave, and suddenly something had changed in what lanes could be used and how, and instead of heading for Plymstock I headed for Mutley. That's 180 degrees wrong! I decided to first pick up Ali and then the kit. That worked.

Ali lead this trip. And now Dave wouldn't come, he was the only person to show up that evening who had been a club member longer than me. In fact he's been a member longer than I've lived, but everybody else was a more recent acquisition. I felt like a veteran! And I was even treated like one... 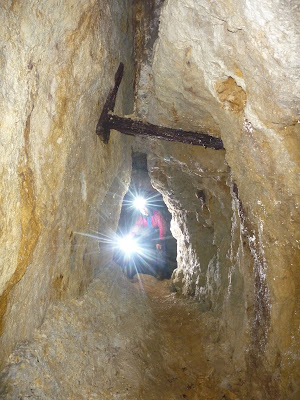 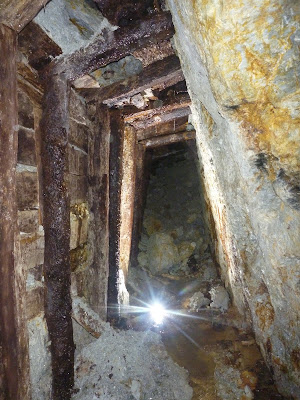 Some slave flash fun in the first mine 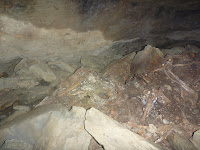 This poor sod had not had such fun in this mine (the second)... fallen in, or gotten lost?

It's good the club keeps growing. And with this fresh team we first went into a small mine with few complications, and then further along the river, and into a more complicated one. That one was a splendid little maze! Inconspicuous, low holes everywhere, that looked like they went nowhere, but actually went all over the place. Ali indicated the normal way on, but as we had had no rope with us we wouldn't go anyway. He added, though, that if people wanted to have a look he wouldn't stop them. He didn't have to repeat that! I clambered over some loose stuff, crawled through a squeeze, clambered past a shaft, and had a look around. No pics, as the rest was waiting for me, but I enjoyed myself. Ali came through the squeeze to keep an eye on me, remarking that for someone who is afraid of traverses I did strange things without a rope. Well, this wasn't a traverse, was it? And then we went back.
While we changed, Dave showed up after all. He'd rather just have a pint with us than not show up at all. And that turned me back into a rookie again!
Posted by Margot at 10:28

Maybe one day I'll blog about caving for halvgamle mænd!