Eight hundred and fifty pages of downfall. Dense downfall. Downfall sometimes disguised as bliss. On my Californian travels I had Anna Karenina with me, and that was a blessing, as it is one of these fairly rare books that can take you though long train rides, flights, and waits in queues at airports. All in a row. 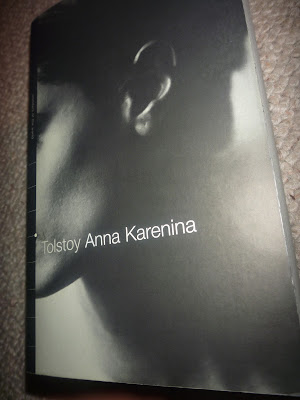 So what was it I was reading about? For those who haven’t read it themselves: Anna Karenina marries because of social pressure, gives birth to a son, but later falls in love with a bloke someone else already is in love with, and yet someone else is in love with that person, if that makes sense. She starts an affair with this man, but it is from the moment on that sparks fly between the two that things start spiralling out of control.

The book has ample space to portrait all those entangled in this soap opera mentioned above, and a whole bunch more. The doubt, the shame, the pride, the regret, it all unfolds over the years. And you inevitably end up pondering what should be done yourself. And I myself ended up with conclusions I had drawn before when reading books set in roughly this period. First thing to do: don’t be born as a woman in times like these! And if that fails: marry the right bloke! Though that may sometimes be harder than it sounds. But once you don’t manage either of these you’re screwed. Ask the Brontë sisters as well, for instance, though they tend to cheat fate and force a happy ending to such stories. If Catherine is so stupid as to not marry Heathcliff, things turn out for the better a generation down the line, but in my eyes this stands out as where the author really tried too hard (blimey, did I just take on Emily Brontë? Hybris!).

Anna Karenina fails both. And thus finds herself in a situation in which she can only lose. And for a while this is not so conspicuous; all seems to go well. By a twist of fate, she is forgiven by her husband, and buggers off on a splendid European trip with her lover with whom she then has a daughter. The lover, by another twist of fate, even manages to not stop being rich enough to cater for them both. So all looks well. But society doesn’t forgive them, she doesn’t get her son back, and all she has is a lover whom she therefore needs so bad she becomes so afraid she’ll lose him that she pushes him away. As a good woman would. So all falls to pieces.

Reading books like that makes you appreciate the battle generations of women have fought to make life what it is now. Maybe even the Anna Karenina’s, who fell, have helped make society ready for independent women. It sounds cheesy and very seventies-feministic, but read it! Maybe you’ll agree. And for those who don’t care about the position of women in society: read it anyway! It’s beautiful to see a human life slowly but certainly come undone. Described by a true master.
Posted by Margot at 15:08