Of the locksmith and the dog

I just wrote there's not much more to my life than work and caving. But that of course is a simplification.

The lock on my front door had become dodgy. And then I invited some friends over for dinner, and the lock had chosen this time to have gotten so dodgy we had trouble opening the door. From either side. So it was time to act. I managed to repair it to such an extent the door could be opened without problems, but that unfortunately also held for the situation in which it was locked. And since I live in a neighbourhood where people try to steal your bike and your car, I thought that was a bad idea.

With unrest in my system I left the lab in order to let the locksmith in. Did he need me for that? Politeness dictates he did. So I did let him in.

By sheer coincidence the dog of the downstairs neighbours was roaming the corridor... and he crashed the party. It was good it was a charming little canine that took advantage of my lock issues instead of someone more sinister! I figured he could pay for my hospitality by posing for some pictures... Charming neighbour, watch your territory! But it's fixed now. So now hopefully I'll only have invited guests. Even though I might be missing out on chaps like this! 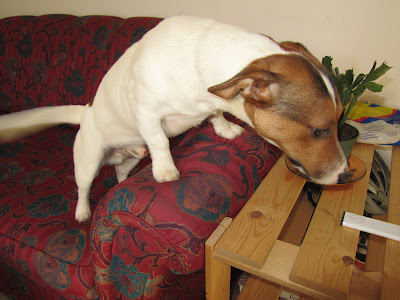