I didn’t have any New Year’s resolutions. But I act as if I did! Who reads the blog would think that, in 2011, I only have been doing science and some caving. Not true! I revived my running habit, with Pete, and it’s expected another colleague will join soon. Running never became a habit in 2010, but now we got into a routine. And it feels good! And Pete is a bloke, so he is quantitative, and he was able to tell me we’re slightly faster every time we run. And as I am always up for a new challenge I put my name down for the half marathon. I never ran that far! But there’s a first time for everything.

This regular habit, though, started to show. As we run from the institute we run on asphalt. With Neil I had already found out my knees object to long distances on asphalt, but many short distances on asphalt was something I started to feel in my ankles. And I will have to be able to do 21 km on asphalt, so I’d better do something about that. And I knew my shoes, emotionally attached to them as I am, were not specifically meant for me, nor for running, nor were they still anywhere near new. So I went to a running shop and got me a new pair. They allowed me to run around on them in the street, which felt somewhat odd; getting out of a shop and legging it feels somewhat suspicious... but I got me a pair, and I look forward to trying them next week. I also had been wondering for months how I could improve my upper body strength; one needs that for getting out of mine shafts, and I always manage, but I want to be able to do much more demanding trips without running out of arm muscle power. And I was about to risk the wrath of my landlord by screwing a beam into a door frame when suddenly Rob showed me the existence of an apparatus that makes that unnecessary. A chin-up bar that wedges itself into the doorframe! I immediately ordered one, with the result that I had to remove a box adorned with ample sweaty and beefy blokes from my university pigeon hole, with slight embarrassment... but the device in place now, and every time I go through that door opening and I have my hands free I do a pull-up. This is going to work! Bring on the fathomless mine shafts! 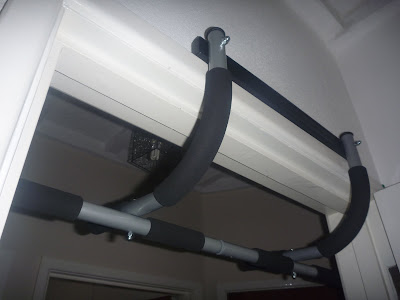 One would assume I'll never get into a better shape than when I was 17 and biked to school and back every day, which was 15 km, but I am sure going to give myself a run for my money!