The ivory tower has a balcony. We natural scientists do peer out over the rest of the world from it. On a conference like the AGU fall meeting there’s a lot of attention for science communication. The first talk I went to was about what society needs from climate scientists. It was a good start. But there was more to come.

There was a panel discussion on science communication. It mainly turned into a vivid example of how that goes wrong: we had the mad, screaming NGO people howling at the panel for allegedly not listening and/or talking to the poor and the young; we had geeky panellists mumbling away quite far from the microphone (by the way: all the guys in my personal AGU hall of fame don’t do that: they are excellent speakers! Wally Broecker, though, shirked this discussion and stubbornly stayed seated in the audience. Oh well, at his age you have an excuse), we had far too civilised chairpersons not keeping either audience or panel under control...

Evidently, these discussions are still necessary. Not only beacuse of discussions like this one. A man that could have been in this panel but wasn't, Richard Alley, mentioned he had been lecturing about the state New Orleans was in decades before the shit hit the fan. And that information was not restricted to universities: there was a plethora of governmental reports that also said New Orleans was doomed. And still nobody acted. And what proves better there's something not going well with science communication than that? The scientific community knew it, the politicians knew it, but the general public probably didn't, for they didn't use their electoral voice to do something about it. And the general public can’t deny a certain degree of seeing us as the people in the white coats with our own agendas without bothering to find out if we really are. There’s work to be done! This blog is only a tiny little effort, but who knows, it might do its share.

And considering that: there also was a panel discussion on science blogging. Some people out there get millions of hits! But then again; this blog is about all sorts of things. And you wouldn’t have millions of people interested in me slithering down yet another muddy southern English cave or mine. It was quite funny that this session lost its internet connection, but it was interesting to discuss about how to attract attention, what the pros and cons are of being either anonymous or fully public, how to deal with nasty comments, how to deal with talking about other people, or about unpublished data. 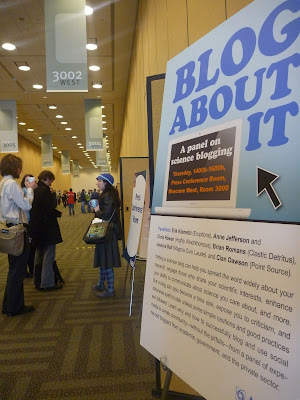 We, in all our fallibility, try to do our share, but hopefully journalists will do the same. Michael Mann emphasised that there are several sources for journalists and the likes to get quick and reliable information. If your newspaper writes bollocks: write to them, and tell them there’s no excuse! There’s realclimate.org, there’s a climate Q&A from AGU itself, there’s the rapid response team, there's lots of other websites... and yes these are reliable sources. They are written by people in the field. And right wing nutcases will say all climate scientists are in a worldwide conspiracy, either in order to get our research funded or because we’re power-crazed madmen (m/f), but well, make your own judgement here. Are we? Muhahahahaaaaa!


So that was a week’s worth of communicating about communicating. And what were the take home messages? For scientists they were:

Be clear! The general public may be hostile towards uncertainty; we’re so used to stressing it, as our peers require that, but don’t, in the public eye, as it will be misunderstood. Be prepared to be misquoted, unheard, and hated on. Don’t numb the audience with horror scenarios. Bring things close to home, both in time and space
Shake off the geekiness; speak with conviction, fire, and absence of “ehmm...” and “errr”; then you’ll be heard!


And for the general public? Well, there was no emphasis on that, as the entire audience consisted of scientists, but I guess that would be: make your political voice be heard! Vote treehugger! Sign petitions! Vote with your feet: consume as sustainable as possible! Inform yourself; there’s so many ways to do that. Read the books by the bigshots! Visit climate websites! And support those whose voice is louder, such as the 350.org people! Maybe one day we can get a climatic Manhattan Project going!
Posted by Margot at 01:02