At AGU time was compressed. There were at least ten years compressed into that one week. Recent time was there: my Plymouth and Durham colleagues. The recent past was there too: my Tromsø colleagues. And the somewhat distance past: colleagues I met during my PhD. And even the distance past was there: people I knew when I was a student. And I think I even caught glimpses of the future! So there was a lot of catching up to do.

To start with the present: we had made sure that the Durham and Plymouth delegations booked the same hotel. From Plymouth, it was Pete, Roland and I coming, but Pete was a local, so he didn’t sleep in a hotel at all. Halfway down the conference, Maria and Rosa would join us. From Durham there was a large delegation, including Tasha and Antony, who are in the same project. And that was fun! In the morning there were always people to have breakfast with, though it must be said the Plymouth delegation seemed to leave the hotel before the Durham delegation had showed up in its entirety for breakfast... we southerners are disciplined and conscientious. 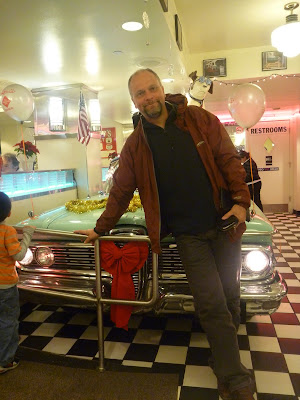 Roland in a cheezy diner
Dinners were often just organised by going to the hotel, bumping into people, teaming up and randomly wandering off to some restaurant. Excellent networking! One night I went for a drink with Maria. And the Durham lot were always up for a drink in the hotel bar after everything else had been done! It was a pleasure to have them around.

On Tuesday everything got chronologically confused.It was my birthday, and I had booked a restaurant. I was very privileged to have two Durham colleagues, one Plymouth colleague, and seven Tromsø colleagues all at my table while I majestically turned 35! 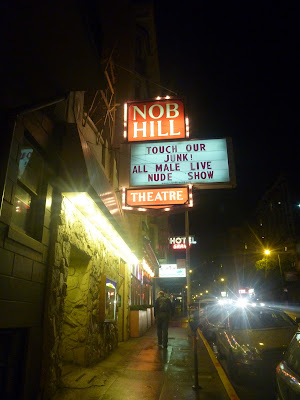 This is what Maria and I encountered on our girls' night out. Did we go in? Did we?
Concerning chronological confusion: I spoke of a glimpse of the future. Early in the conference I bumped into Eelco, who pulls the cart of the proposal that, if funded, gets me three more years of sea level work in Plymouth... they would tell us this year, but they won’t!


The recent past is the Norwegian lot; beside the birthday meal I one day scored Helgard and Steve for lunch, I met Dima at his poster, and on Friday I teamed up with Arto and his wife, in an excellent Japanese restaurant. Unfortunately, I was knackered after a week of heavy science and a lack of sleep, and I had been fed quite an amount of dubious booze by Antony, who had gathered lots of women in his hotel room, and who was not going to let any of the two litres of booze remain undrunk. Roland, by the way, would have revelled in such a situation, but Antony is of a different material, and he was very relieved when two male colleagues showed up as well. Anyway. I was not at my best at that dinner! And when I got home I fell asleep on my bed with all my clothes, including shoes, still on. I think they understand... 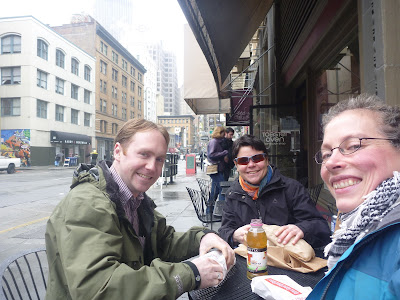 With Steve and Helgard at lunch
When I walked to the conference centre on Tuesday I suddenly heard singing. It was two Dutch ladies who knew it was my birthday! Dutch singing, so that’s the more distant past. One of the girls I had met on a Lance cruise, and the other one had been a student at the VU when I was a PhD student there. People from longer ago! And they sang “happy birthday” to me. That was sweet.

I also bumped into two gentlemen I knew from when I did geochemical lab analysis in Cambridge. That was cool! One I expected there; he’s quite a bigshot. I’ll see him again in Bern, next year, at the next conference. The other one I had lost track of. It turned out he now taught seismic methods in Chile! Who would have thought. He was doing well! Got engaged in the meantime. And spoke fluent Spanish. 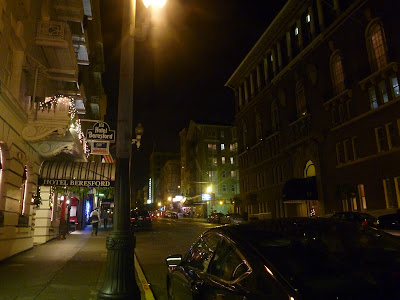 Our hotel
The furthest back in time I got was when I was standing at my poster, and was suddenly tapped on the shoulder. It was one of the guys who was a postdoc in Amsterdam, when I was still an undergraduate there! Even he hadn’t changed a thing. He was presenting a poster right behind me. Interesting stuff, with seismics of a Messinian erosional surface off the coast of Spain. Quite something else!

So my whole scientific life floated past. From the times I could round 20 million years off to zero, all the way to now, when I ignore everything that’s older than 500 years. I got told I hadn’t changed. But my life, and my work, definitely have!
Posted by Margot at 13:37