Christmas with my sister

We have nothing in common except our frequency. Many years ago, my father said this about my sister and me. And as we were so close I had noticed our undisturbed communication, but never really registered our profound differences. But they are there! Indeed, we have not much in common other than a last name. And the differences grow in time. My sister likes things systematic, clean, and well-designed. I like things to facilitate my life without costing any time themselves. She is happily married and doesn’t spend very much time with friends. I don’t have an impressive resume when it comes to relationships, but I can’t get enough of friends. She has the patience to faff around in a supermarket to make sure she buys exactly what she wants, and take time cooking it, and she can’t be asked to do uncomfortable and painful things. I do things like shopping and cooking as quickly as possible in order to have time for nicely painful and uncomfortable things such as caving. I like 3500BC to 1000AD, and she likes modern history. I drink alcohol and she eats sweets. And there’s much more than that. But we still communicate on the same frequency! Nobody knows me like she does. If I have to get anything off my chest I write to her.
We would celebrate Christmas together, and I really looked forward to that. But then I didn’t manage to leave San Francisco. And then I got stranded in Frankfurt. And Heathrow was still a mess, and she was supposed to fly over that airport! Would we make it? I was already coming to terms with the possibility we wouldn’t make it. But we made the effort, and it worked! I t was great to see her, and Antero, her husband.
I expected a calm Christmas with lots of tea and games of Scattergories, the customised version. And that’s what I got! And it was what I turned out to need: after the exhausting trip I managed one day of remnant health, and then I descended into a cold. No state to go on wild hikes or things like that. But Marieke wouldn’t be up for that anyway. And I would have liked to have a bit less use for handkerchiefs, but beside that it was a great time! We did go to Dartmoor, but there was way too much snow there. I send them off to the South West Coast Path (east of Plymouth) while I stayed on the couch, feeling snotty. 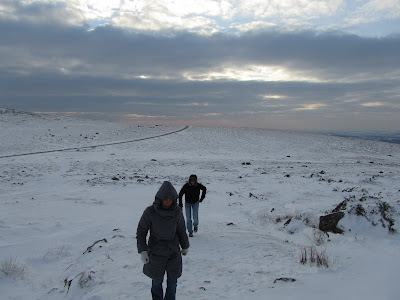 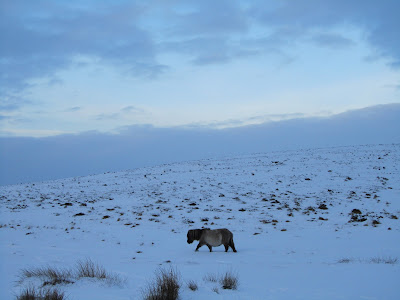 We did a few meters of the South West Coast Path (west of Plymouth) in the beautiful sun. We drank litres and litres of tea. I drank all sorts of English Ales with Antero. We hung up Roland’s Christmas decoration, which he didn’t need himself, as he didn’t celebrate at home. We played Scattergories until we dropped! And even there the differences were evident. I know all the bands and characters from books, and she knows all dishes, sweets and spices. And lots of other things I don't want to remember. And it was great! 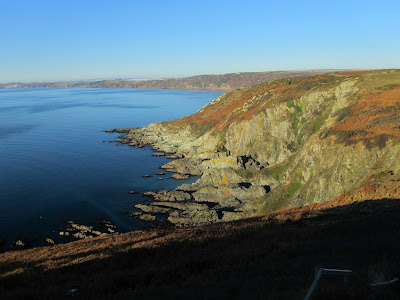 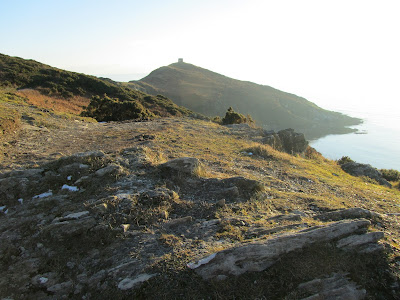 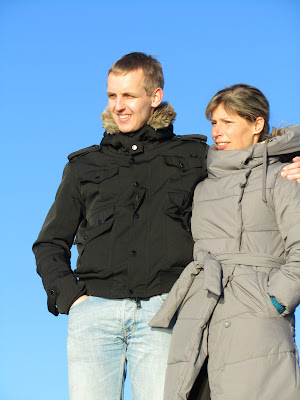 It may be winter on Dartmoor, but it wasn't at the coast!
As I arrived at home at the same time as them I hadn’t been able to raise my house to their hygiene standards (Marieke is keen on cleanliness and Antero is allergic to most things, including dust) but Marieke just did that herself. She was happy to help me eat sweets that were lingering around the house (these have a very long half-life in my household). And it turned out I had been looking for a watch like she had, while she actually wanted another one. So she gave me hers! Sweet! Things worked out miraculously.

On Christmas Day we would go to the pub (more to Antero’s delight than Marieke’s) with Jon and John, but I hadn’t counted on the effect Christmas has on the UK. Marieke doesn’t ride a bike anymore, as it locks her ankle, and the water taxi didn’t go, and all land taxis were engaged. You can’t reasonably walk to that pub from where I live! But such is life. We had a glass of mulled cider and were quite happy anyway. 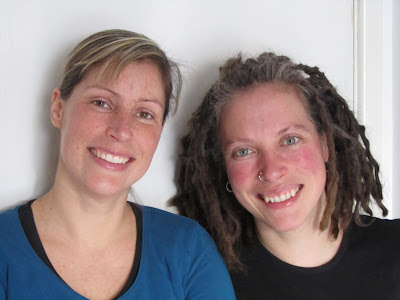 Some old remnants of sibling rivalry force me to point out that on this picture, Marieke is wearing shoes, and I'm not! We are of the same height.
And way too soon it was Sunday and they left. But we can just keep things going by letter. And we'll see each other again!
Posted by Margot at 11:08

Actually, I could easily go to three supermarkets to get exactly what I want. One face-saver: I do like hiking! I'd have been awfully embarrassed about our quartermile strolls if it weren't for Antero to put all blame on.