At a big science conference you tend to get a science overload. I think the blog already speaks of that! But I am not a science blogger. I am just a blogger. And this blogger was far from home, in an interesting place! I already spoke of the trip to San Francisco and the half day of fun we had before it all kicked off. And then on Monday morning it did! 8AM I enjoyed my first presentation.
AGU is big. Very big. It seems at the peak there were 18.500 people. We had two very large buildings at our disposal: one for posters and some talks, and the other one for all the other talks and some fringy things. And these buildings were not on the same street. We saw a lot of pedestrian crossings. At these crossings there were often people distributing free juice. I like! American hotel rooms don’t come with a kettle, so I was permanently at risk of dehydration. 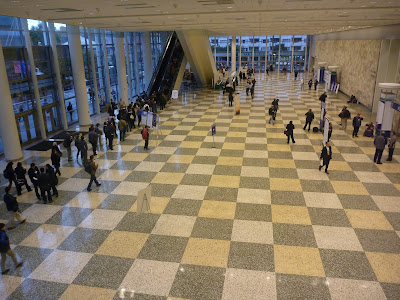 Random shot of the central hall of the building with most of the talks in it
There’s always countless many sessions going on at the same time, but I didn’t encounter many conflicts. And the organisation is excellent; they distribute a newspaper with all sessions in a very comprehensible way every day. And there’s wi-fi everywhere, so you can search the program as well. And the buildings are so big it hardly gets stuffy, even with thousands of people in them! And at the poster sessions they serve free beer from 15.30 to 16.00, which keeps everybody’s spirits up.

The Monday and Tuesday were reasonably quiet. I went to talks, I had a look at posters, but in between things I had time to blog, check e-mail, go into town and look for a kettle in vain, and for earrings (for the PCG Xmas do!) with success, and drink beer. 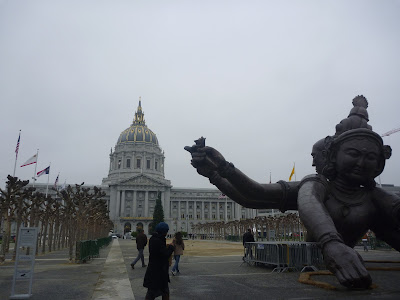 Not sure what this building is; I think it's the town hall; and what that three-headed, five-armed woman is doing there, but they were photogenic!
I had nothing on my schedule for Wednesday, so I figured I would take the chance to rent a bike again, and bike to the Redwood forest on the other side of the Golden Gate Bridge. But over breakfast I bumped into Roland, who said there were many interesting things going on. And there were! So I changed into my official-looking kit (well, for my standards, that is; still including boots as your feet suffer hard at such a conference) and went anyway. And I was glad I did! I had made my schedule a bit quick, so I had missed many interesting things. Luckily you can update yourself on the fly. And most of the things I’ve blogged about so far were from the Wednesday. And in a rare break I got mail: we had our final 14C dates coming in! So I had to process them there and then.

The thing with 14C dating is that they often give you several options. And I had to compile a lot of these options from several sources, which requires a systematic mind, which I don’t have. And after compiling them comes the making sense. If you then have about 10 of them, you have unspeakably many possible ways of drawing a line through all the possible ages. You would normally use some software package for that. Tasha and I gave it a try, but our netbooks were not up for it. We will have to do that in the office, with a solid desktop. But at least I got to compile them: I had left a table on my poster blank, to fill them in. My poster would be very, very fresh from the press! 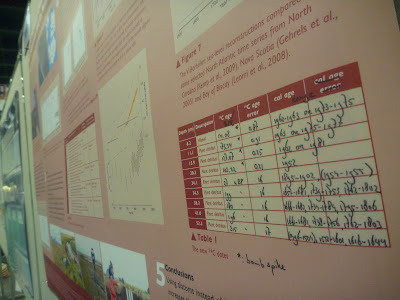 My scribbled-on poster
Another thing about AGU is that it’s very broad. I could go to presentations about the topic of my Master’s degree, my PhD, my first postdoc job, and my present one, and countless many more. Good to stay in touch with all that! I especially was happy with a whole session on the glacial-interglacial cycle. It’s still not clear how it really works, and it’s fascinating!

Thursday was another day that just whizzed past. I was at the conference from 8AM to 6PM, and I didn’t even feel tired, even though I was still jet-lagged, and woke up at ridiculous hours every morning. And then Friday: the day of my own presentation! In the morning there were the talks of our session. In the afternoon there were the posters, mine included. In between I managed to sneak off for lunch. And then I could get moving! As we still are working on data generation, my poster wasn’t as spectacular as it would have been later in the project, but there still were people interested. And my neighbours had interesting posters as well. And colleagues brought me beer, while I was attending to my poster! But at about 5PM I gave up. I knew the Durham crew would already be boozing. So I gave an old friend, who came to my poster when I was already taking it down, an A3 printout of it, and then we walked away. I threw my badge in the badge-recycling-box, knowing now there was no way back, and went to the hotel. The conference was over! And it had been a good one! 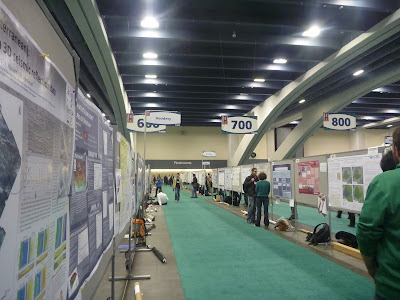 This picture was taken just before the poster session kicked off. It would actually get crowded later, even though it was Friday afternoon! The red poster on the right is mine.
Posted by Margot at 18:44

I had never thought of you as a person in risk of dehydration...Try a Budweiser...

You never noticed that I spent half my working hours walking to the kitchen and back, in order to refill my thermal bottle? And if I would have been drinking as much Budweiser as I drank water I think Nalan would have intervened...