I already mentioned once that if you’re a caver, and people hear of that, they tend to react with something like “rather you than me”. Sometimes people think it’s cool. But a few months ago I got a completely unprecedented response: “my grandfather used to do that!” It turned out that the wave of new employees  featured the grandson of the pioneer of Mendip Caving.  And not much later this grandson, Chris, handed me a book his grandfather had written.  He said he would not hold it against me if I would just lay it aside after only a few sentences; it might be exhaustive and certainly old-fashioned. Luckily I like both! So instead of laying it aside I read it cover to cover. 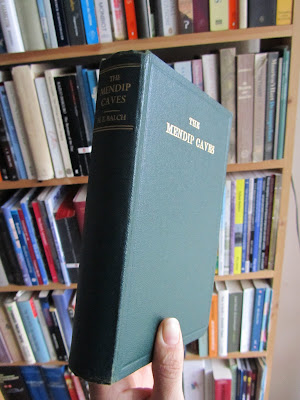 The book I borrowed turned out to be three books in one cover: Mendip - The Great Cave of Wookey Hole; Mendip - Cheddar, its gorge and caves; and Mendip – its Swallet Caves and Rock Shelters. I had only visited two of the caves described in Book 3, but that didn’t matter. Herbert Balch was a very erudite man; he writes not only about cave exploration, but also about geology, geography, palaeontology and history. And it’s a pleasure to get a view on caving as it was done in the late 19th century and the early 20th. Balch was from 1869, and before the century was over he’d built quite a caving resume. The first edition of the first book came out in 1929, the first edition of the third one in 1937, and this edition (the 3rd) in 1948. And you can see time progressing in it. The oldest trips described in it take place in the 1800s. The third book has a lot of co-authors; understandably, as the main author is of respectable age by the time the most recent parts are written. At 78 he might leave the most demanding trips to others! 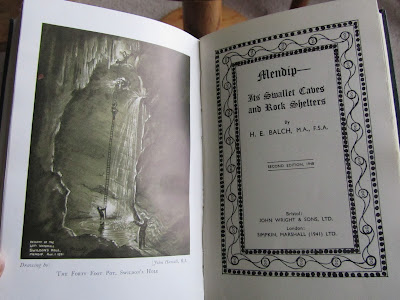 Fourty foot pot - I've been there!
Caving must have been a real adventure in these days. Light tends to be provided by candles, the ropes are cotton, the caving clothes are tweed... Balch almost falls to his death in one of the caves, due to a rotting rope. Somewhere else in the book one of his mates gets bitten by a viper on the way from fossil hunting, and Balch has to carry him back to civilization. And mention of a gentleman who thought caving was best done in pyjamas, but these don’t withstand rubbing on rock very well, so the story mentions he has to borrow handkerchiefs to cover himself on the way back home.
There’s also a genuine love for the caves in the book. Balch for instance describes finding a passage, terminating in an impassable forest of columns. He turns back. But later trips reveal that some other scoundrel has smashed the formations in order to get through. Balch wishes this person, whoever it may be, to break his neck during his further caving career...

If Herbert Balch would still have lived he’d evidently be 141 by now. I hope we can take his grandson on a trip some day. Chris has expressed his desire to go underground again. And that would be connecting the PCG to well over a century of caving history!
Posted by Margot at 09:16