If you move to a country as culturally distant as Norway is from the netherlands, you suddenly appreciate literature education in school, and the stream of cultural information in the media. I never knew how much at home I was in Dutch, English, French and German literature until I went to Norway. I suddenly was utterly lost in the library and book shops! And most of my friends were no help either. Most of them were equally lost foreigners, and the Norwegians were too busy skiing, kayakking, climbing, hiking, fishing and whatnot to have a solid grasp themselves. So I held on to Ibsen for dear life. And beyond that went for compromise.

When I'm in Norway I try to buy books in Norwegian, but as I don't know which writer I might like I often end up buying books that have been translated into Norwegian from a language I don't read well, or not at all. So I have an Allende in Norwegian on the shelf; I can't read that in the original language anyway, so why not read it in Norwegian. And I bought a book of an author I did not know, but the topic sounded interesting. The Norwegian version of "Fünf Jahre meines Lebens" by Murat Kurnaz. A description of life in Guantanamo Bay from inside! 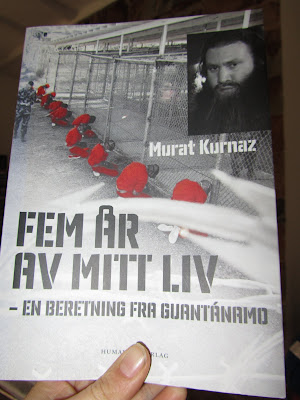 I would say: read this book. It's available in German, English, Dutch, French, Danish and Norwegian, so the possibilities are endless. But don't expect to be cheered up by it. You read in the newspapers fragments of how bad it is in there, but a description of a several year stay hits hard. And the bloke ended up there mostly for being at the wrong time at the wrong place. And a little bit because of one bullshit remark by a would-be friend. It's scary. And it gets worse if you read he afterwards finds out it was already clear in 2002 that he was plain innocent, but as the German authorities were not very keen on letting a muslim with a beard, however law-abiding, back into their country, they let him rot there for another four years, until elections changed the players on the field.
One appreciates freedom and a life devoid of torture much more after reading this. It should be something you can count on, but evidently it isn't! And I take my hat off to the author, who managed to not be broken by this experience. I hope his voice is heard and that the powers that be will be less and less able to get away with such outrage...
Posted by Margot at 10:58