“As you’ve put Russian literature on my desk...” I was standing at US immigration. I needed to get my passport and some other documents out, so I had to lay my book down. I had figured that for this 5 hour train ride and 10 hour flight, and then back as well, I needed a substantial book. I had chosen Anna Karenina by Tolstoy. And now I had laid it on this authoritive-looking American male’s desk. Oops. 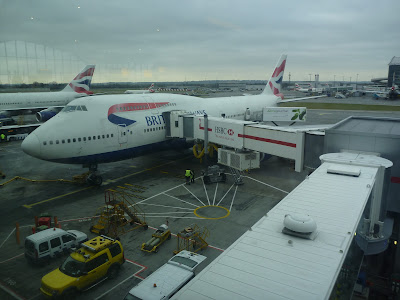 I promised the Geography aviation geeks a picture of an airplane... here it is; the one that took me to SF!
“As you’ve put Russian literature on my desk... you’re my favourite person of the day! I’m reading a Tolstoy myself at the moment...” That went well! In line with everything else. The trip so far had been very uneventful. Lots of quality time with Mrs Karenina. I was on my way to the AGU (American Geophysical Union) fall meeting in San Francisco. Tasha and I would have to present our results so far there. Roland and Antony would be there too. And then some other 15.000 people or so.

Not very long after discussing Tolstoy with the immigration officer I happily felt Roland’s abrasive cheek. There was no wi-fi in the hotel rooms, so he was sitting in the lobby, and was the first phenomenon I saw when I walked in. Half an hour later we went out for a beer. 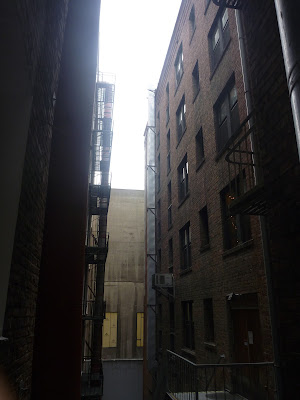 The very American view from my hotel window
In case you can have Roland be your travel guide you should. He took me to John’s Grill, which seems to feature in The Maltese Falcon, and then we went for dinner. A bit of a strange dinner; he’d flown in eastward while I’d flown in westward, so when we had our food served it was 4AM for me, and 4PM for him. After dinner I was keen to go to sleep...

The next day was scheduled for some fun and some de-jetlagging. Helgard was in town too, so after breakfast we convened, and went into town. With Helgard it always feels like you've never been separated! We rented bikes, and made a circle, over the Golden Gate bridge, and then around the bay, and back by ferry. Splendid! And then it was already time to have a shower, and go to the congress centre for registration and the icebreaker. On the way there we bumped into some ladies I knew from my time in Amsterdam, and from one of the Lance cruises. They would almost remain the only acquaintances we’d meet. 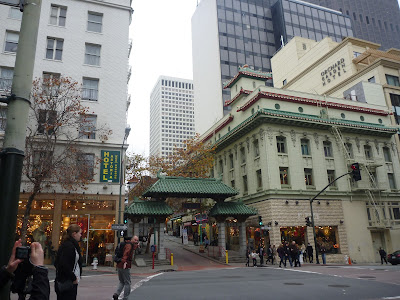 The gate to Chinatown 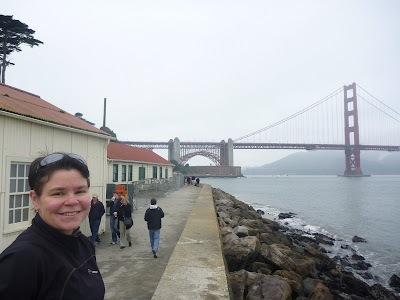 Helgard and the Golden Gate Bridge 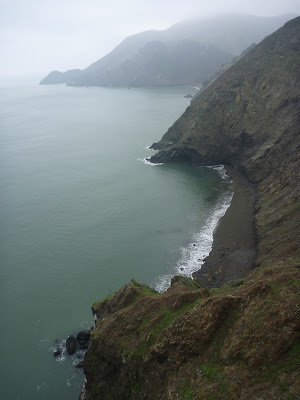 The view down from the bridge on the other side 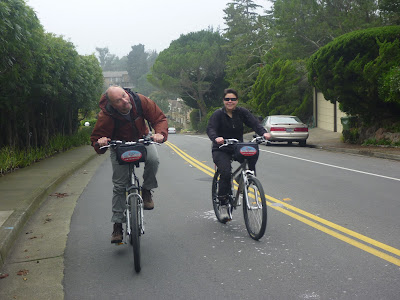 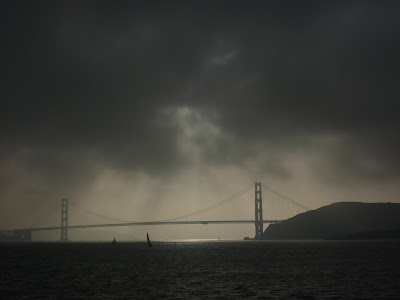 The golden Gate bridge decoratively seen from the ferry
I went for dinner with Roland and Ian, who’s another sea level giant from Durham. We were just about to pay the bill when some very tall person and some not very tall person walked into the restaurant. Matthias and Dorthe! I really hoped to see Dorthe; I hadn’t since I left Norway. But we agreed on meeting on Tuesday. And after one last whisky in the hotel bar (there’s no avoiding some booze if Ian’s around) I went to bed again. The next day the conference would kick off, with interesting sea level talks from 8AM on!
Posted by Margot at 01:09

Maybe I should eaborate a bit. War & Peace deals with all sorts of people, and massive events in European history, and theory on war! Lots of interesting variation. AK so far almost only with all sorts of people, though some societal issues are brought up... and some of the characters from AK are so similar to characters from W&P that reading them without much time in between might be a bit tedious. But that's my humble opinion!

am very impressed that the only news the outside world have on this conference of yours is:
http://www.bbc.co.uk/news/science-environment-11867165

That means I'll have to write about it! As I write this I've written 6 posts already, and there's more coming. Hope at least a handful of people whoe were not there get a bit of the spirit...